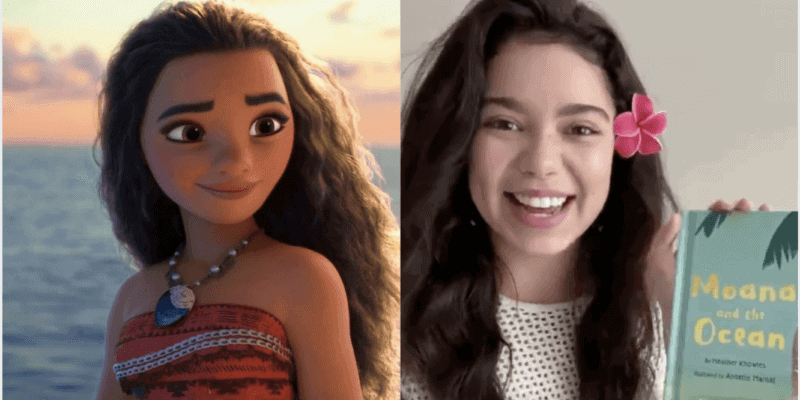 Auli’i Cravalho, the voice of Moana, is the latest Disney star to read a children’s story for the Disney Magic Moments initiative. The Walt Disney Company has been using the #DisneyMagicMoments hashtag to bring Disney magic to families while they are spending more time at home.

For her Disney storybook, Cravalho selected “Moana and the Ocean.”  This book, written by Heather Knowles and beautifully illustrated by Annette Marnat, follows Moana’s journey as she learns why the ocean calls to her.

The word “Moana” actually means “ocean” or “sea” in Hawaiian and “vast body of water” in many Polynesian languages!

Make way! ? Settle in to hear “Moana and the Ocean” read by @auliicravalho, voice of Moana. #DisneyMagicMoments pic.twitter.com/TjsIuW1GPO

Cravalho takes families on a fun adventure as they go on Moana’s journey alongside her. The hardcover Disney children’s book was published before Disney Animation Studios’ Moana released, but can still be purchased online if you’d like a personal copy for your little minnows!

The stylized illustrations are reminiscent of vintage island artwork seen on retro travel posters. Your family is sure to love exploring Moana’s world with Auli’i Cravalho as she reads this Disney Press children’s book!

Paige O’Hara, who voiced Disney Princess, Belle, in the 1991 animated Beauty and the Beast, and Disney Channel actress, Brenda Song, have both recently read aloud short Belle bedtime stories that are perfect for little girls of all ages.

Josh Gad, Olaf’s voice actor in the Frozen franchise, was among the first Disney celebrities to start reading bedtime stories online. Gad took to Twitter to provide families with a daily respite from quarantine in March.

Has your family been enjoying watching Disney stars read kids’ stories during your time at home? Which Disney character children’s books have been your favorites so far? Tell us in the comments!

Comments Off on Make Way! And Join Moana’s Auli’I Cravalho as She Reads You a Story