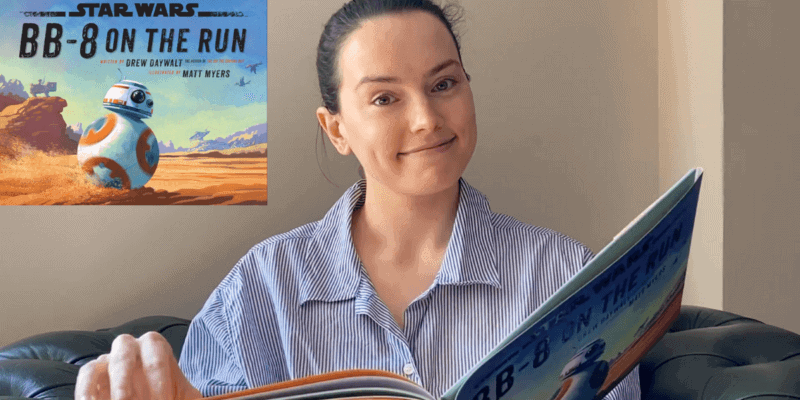 Gather ’round everyone! Rey’s going to read us a story about her best friend, BB-8!

As part of Disney’s #DisneyMagicMoments social media campaign, Star Wars Actress, Daisy Ridley has decided to read a story to all of the little Padawans and Rebels across the galaxy called BB-8 on the Run.

Use the Force, Rey… to read a story! Join Daisy Ridley as she reads “Star Wars: BB-8 On The Run.” #DisneyMagicMoments

BB-8 on the Run is a children’s book tells the story of BB-8 right after he was separated by his owner, Rebel Pilot Poe Dameron (Oscar Isaac), and must go at his mission alone in the vast desert of Jakku. Now, we only saw a little bit of those adventures in BB-8’s first Skywalker Saga movie, Star Wars: The Force Awakens, but hopefully, now, we’ll get to hear a little more about what happened between his separation from Poe and meeting with Rey.

So, who better to tell this story than Rey herself? I mean, Disney would have BB-8 tell you himself, but not everyone can understand him.

When BB-8 is separated from his master, Poe Dameron, on the lonely desert planet of Jakku, he has no choice but to keep rolling. It’s all up to him to get a top-secret map back to the Resistance so they can find Luke Skywalker and save the galaxy from the evil First Order.

It’s scary to have a big job when you’re just a little droid on your own. But BB-8 isn’t alone for long. As he speeds across the sand, BB-8 meets all kinds of strangers who need his help. Should he do good things, as Poe always told him, or will that get in the way of his mission?

It takes Ridley less than ten minutes to read this exciting story, and the video can serve as a perfect bedtime story to send your kids off dreaming about their own adventures in a Galaxy Far, Far Away.

Are you a fan of BB-8? Where does he rank among your favorite Star Wars characters? Let us know in the comments!