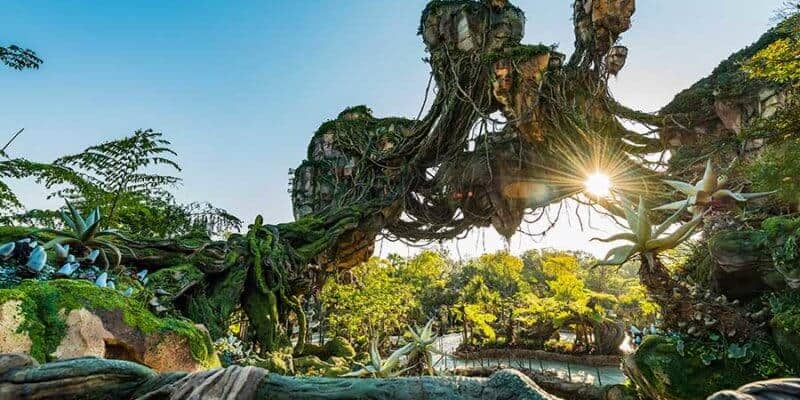 Last week, we shared Disney sunrise photos that featured beautiful looks at the castles from around the world. You could almost imagine walking toward Cinderella Castle at the Magic Kingdom or Sleeping Beauty Castle at Disneyland park first thing in the morning!

Now, the Disney Parks team is showcasing the beauty of Disney’s Animal Kingdom with a new series of sunrise pictures.

These pictures of DAK’s iconic Tree of Life show sunlight streaming down into Disney World’s wildest park. The first image almost looks like a scene straight out of the live-action Lion King movie!

From this angle, sunlight illuminates the gorgeous Tree of Life carvings and a sun-dappled buffalo carving in the foreground. Discovery Island has never looked prettier!

The Walt Disney Imagineering team shared images of early morning Pandora: The World of Avatar on their Instagram page.

Pandora is one of the Imagineering department’s crown jewels. The team truly transformed this section of Animal Kingdom into an otherworldly paradise. This Pandora sunrise is sure to get your week off to a bright start!

Disney Imagineers also posted this Pandora: The World of Avatar picture, showcasing a Disney World sunrise sky that would make the Na’Vi jealous!

One of our favorites is this shot of sleepy lions at Walt Disney World’s Harambe Wildlife Reserve! You can pretend you’re on a private sunrise safari.

Dr. Mark also shared a sunrise picture of mother and baby zebras at Disney’s Animal Kingdom theme park. There’s no doubt this super cute photo will bring a smile to your face, even if you haven’t had your morning coffee yet.

Comments Off on Disney Magic Moments: Sunrises from Animal Kingdom to Start Your Week Right!