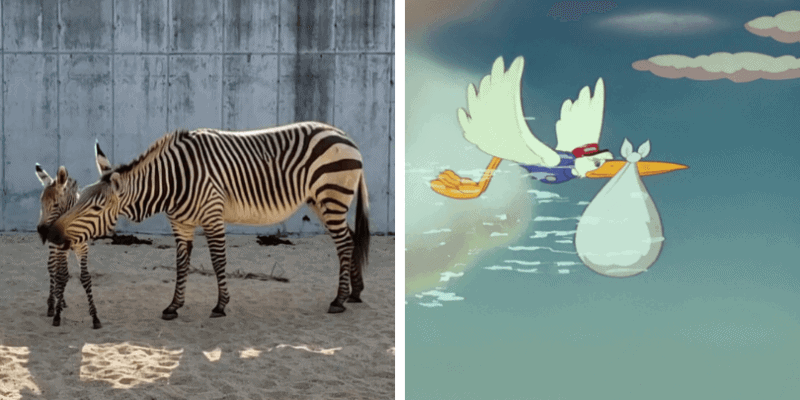 Despite Walt Disney World and most of the United States being shut down, it looks like Mr. Stork is still making his rounds. Earlier this week, Disney’s Animal Kingdom had the pleasure of welcoming a new baby into its herd of Hartmann’s mountain zebras.

This adorable baby girl, still unnamed, came into the world in the early hours of Saturday, March 21, 2020, to first-time zebra mom, Heidi. Already 65 pounds, the little girl was walking less than an hour after birth and is already curious and active as ever. Heidi is also proving to be a great mama.

According to Disney’s Animal Care Team,

Heidi is showing she’s a natural at parenting skills as she stays close to her baby to bond with her and nurse. Bonding is especially important, as a young zebra will imprint on its mother’s scent and memorize the unique markings on its mother’s hind legs to tell her apart from the rest of the herd. In a few weeks, after the pair develop a strong bond, they will be introduced to the Kilimanjaro Safaris savannah.

You can watch an adorable video here:

This precious little girl is the third zebra to be born at Disney’s Animal Kingdom as part of the Species Survival Plan (SSP) program. It is overseen by the Association of Zoos and Aquariums (AZA) to ensures responsible breeding and genetic diversity of thousands of species of animals. The Hartmann’s mountain zebras are a species found in sub-Saharan Africa and are considered vulnerable because of loss of habitat and hunting.

Just yesterday, Disney’s Animal Care Team came out to remind us that all of the residents of Disney’s Animal Kingdom are continuing to be cared for as if it were any other day. They also confirmed that they will be sharing uplifting and educational stories of the animals for all of us to enjoy while we’re stuck at home.

Things are tough right now, but the chance of seeing a beautiful baby zebra prancing around its section of Kilimanjaro Safaris is just another reason to get through it.