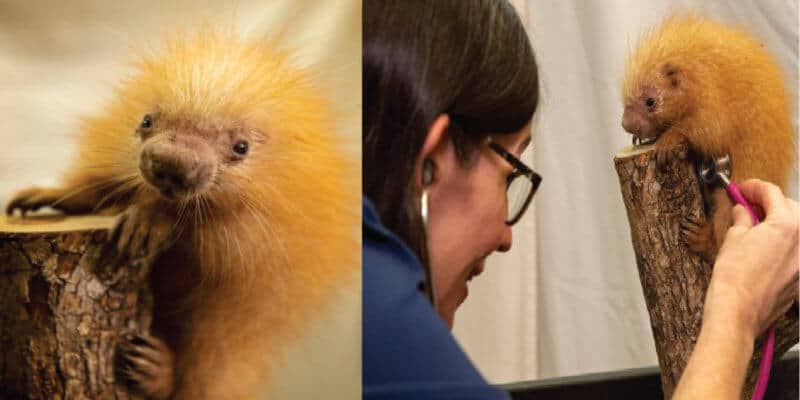 The Disney parks may be temporarily closed, but there’s still lots going on behind the scenes! The Disney Parks Blog recently revealed a new baby prehensile-tailed porcupette, born on February 25th at Disney’s Animal Kingdom. Check out this adorable video that came with the announcement!

The porcupette was born to mother, Peri. The Parks Blog mentions that fans may recall a pregnant Peri receiving an ultrasound in the One Day At Disney documentary on Disney+ . Cast Members at Disney’s Animal Kingdom have continued to work despite park closures, helping to welcome the porcupette to the world while caring for other animals at home in the park. We have to commend the hard-work of Cast Members that continue to provide care for these Disney animal families!

In analyzing the small quills hidden under the red fur of the baby, the team was able to confirm that Peri’s baby is a girl! The baby girl porcupette is the product of the Species Survival Plan (SSP), a program that is overseen by the Association of Zoos and Aquariums. This partnership with Disney ensures optimal breeding standards of the animals that live at the parks. We couldn’t expect anything less from Disney, who takes care of thousands of animals, land and aquatic, in many of their parks.

We hope to be able to visit the new baby and mother, as well as all the other fascinating and cute animals at the Disney parks, as soon as possible! We will continue to update on the duo, and hopefully have a name to report for this new baby girl soon!

What do you think of the new baby porcupette? Did you know “porcupette” was even a word before this (because I didn’t!!)? Let us know in the comments below!