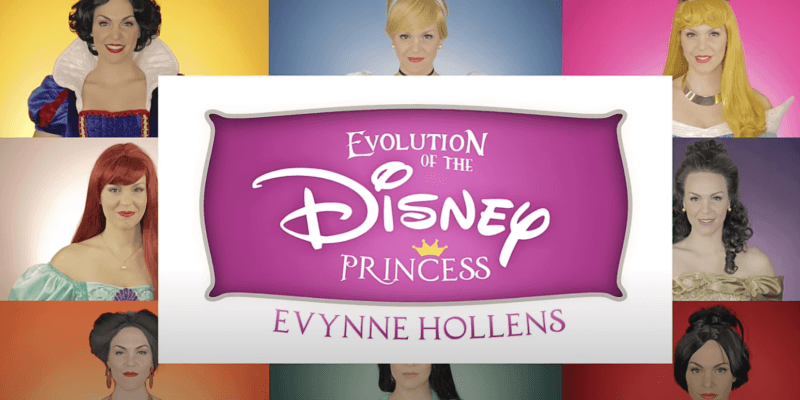 The Disney Princesses are among the most iconic characters in Walt Disney Studios history. When you hear a song from a Disney Princess movie, whether it’s “Someday My Prince Will Come” from Snow White and the Seven Dwarfs (1937) “Part of Your World” from The Little Mermaid (1989), or “Let It Go” from Frozen (2013), we know you start singing every word!

YouTuber Evynne Hollens has created an incredible medley that celebrates the most famous songs from all of the Disney Princess movies in the order they were released. This 7-minute tribute to Walt Disney Studios history is a a must-see for anyone who loves Disney movie songs. The full Disney Princess movie song video can be viewed at the end of this article.

The video editing is fantastic, with all of the Princesses paying rapt attention as each Disney character gets her turn to sing. We also love how each Princess is introduced alongside the year her movie came out, like Princess Belle below:

There are two full screens of Princesses in this Disney song medley video. The first features many of Walt Disney’s most classic Princesses, from Snow White to Mulan.

The second screen primarily showcases newer additions to the Disney Princess line-up, including much-loved characters like Merida and Rapunzel.

And, of course, what celebration of Disney Princess songs would be complete without Elsa belting “Let It Go”?

The full line-up in this Disney Princess song tribute video is:

The full Evynne Hollens Disney Princess medley can be viewed below:

We love that the talented singer performs as each fairy tale Princess character in the order the Disney Princess movies were released! Hollens and her husband have numerous other Disney song videos on their official YouTube channel.

What do you think about this “Evolution of the Disney Princess” video featuring Disney Princess songs through the years? Which Disney film from this medley do you like best?