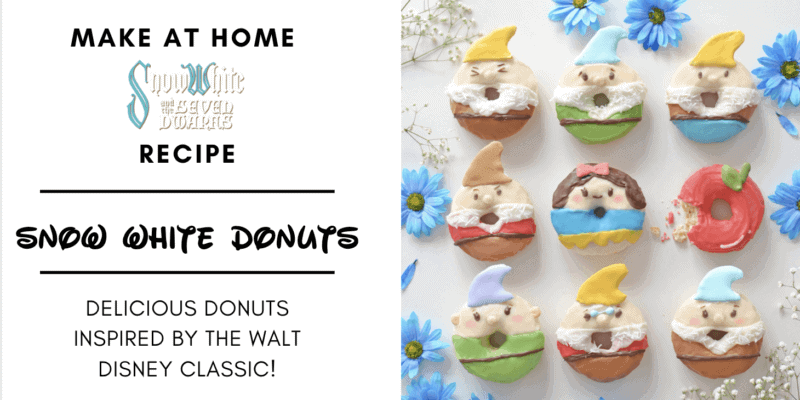 As a huge fan of all things Walt Disney, his first animated feature film, Snow White and the Seven Dwarfs, will always hold a special place in my heart.

These adorable donuts featuring all of your favorite Snow White characters (plus a poisoned apple!) are nearly too cute to eat! Find the full Disney donut recipe below.

Snow White and the Seven Dwarfs Donuts (Courtesy of Disney)

Spray the donut pans with non-stick cooking spray or coat with melted butter. Set the pans aside.

In a large bowl, whisk together the flour, sugar, baking powder, ground cinnamon, and salt.

In a smaller bowl, whisk together the eggs, milk, butter, applesauce, and vanilla extract.

Add the wet ingredients to the dry ingredients and stir together until all are combined and no flour clumps remain. Try not to overmix the batter!

Remove donuts from the oven and allow to cool in the pan before inverting them onto a wire rack. (Tip: To help release the donuts, use a toothpick to loosen the sides.) While they’re cooling, make the glaze.

In a medium bowl, whisk together the powdered sugar, vanilla extract, and heavy cream. (If the glaze is too thick, add additional cream-about 1/2 teaspoon at a time until the desired consistency is reached).

Divide the icing into 7 small bowls to make red, beige, brown, green, blue, yellow, and white (leave icing as is for white).

Add food coloring into each bowl, corresponding to each of the character’s clothing. For Snow White and the Dwarfs, dip 1/3 of each into the beige icing for their faces. Then add on a nose with the same beige color, using a toothpick. Spread on the other colors for their clothes with the back of a small spoon.

For the Dwarfs’ beards, pipe white icing then sprinkle shredded coconut on top.

Make the royal icing: Add powdered sugar, meringue powder, vanilla extract, and water into the bowl of a stand mixer with the whisk attachment. Start mixing on low until incorporated and then beat on medium-high until stiff peaks form (around 5 minutes).

Divide the icing into separate bowls and add the food coloring needed for each detail (hats, bow, and apple leaf/stem). Then use the royal icing to pipe the shapes onto parchment paper (red for Snow White’s bow, green for the apple leaf/stem, and various colors for the hats). Let them dry (takes approximately 1-2 hours).

Then peel off the parchment. Attach the pieces onto the character donuts with a bit of white royal icing (which acts as glue), and they’re ready to go. Enjoy!

These Disney donuts would be perfect for a Snow White party or for a special weekend activity with your family. Kids are sure to love creating their favorite Snow White movie character in donut form!

Tell us in the comments if you’re excited about making this Snow White and the Seven Dwarfs donut recipe at home!

Comments Off on Hi-ho, hi-ho! It’s Off to Make These “Snow White and the Seven Dwarfs” Donuts