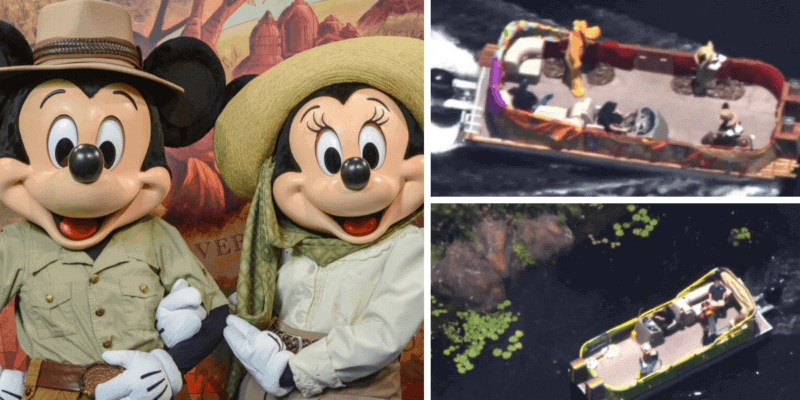 Disney is officially testing the newly reimagined character meet and greets at the Walt Disney World theme parks ahead of reopening this week. We know that characters will not be meeting in the parks in the traditional way, but as Disney has said before, they will be present in new and exciting ways so that Guests can still see their favorite friends at the Most Magical Place on Earth.

Disney’s Animal Kingdom park, for example, will be offering new character cruises, giving Guests the opportunity to see characters like Mickey Mouse, Minnie Mouse, Donald Duck, Pluto, and more throughout the day, sailing through the waterways of Animal Kingdom.

You can see some sneak peeks of characters on their new cruise at Disney’s Animal Kingdom below. Note that these screenshots were taken from Facebook live footage courtesy of local news station WESH 2:

We previously shared another sneak peek of what Guests can expect when it comes to the Disney World character cruises at Disney’s Animal Kingdom park. You can read more here.

Below is a list of the entertainment that will be offered at Disney’s Animal Kingdom, which is scheduled to reopen on July 11:

Character Cruises throughout the day, with Guest-favorite Disney friends appearing in boats around Discovery River—including the following:

It's a busy week at Walt Disney World as some parks are set to reopen Saturday and stars from the NBA and MLS prepare to resume competition. https://bit.ly/3e1MvKk

Comments Off on Characters Spotted at Disney World Before Reopening!