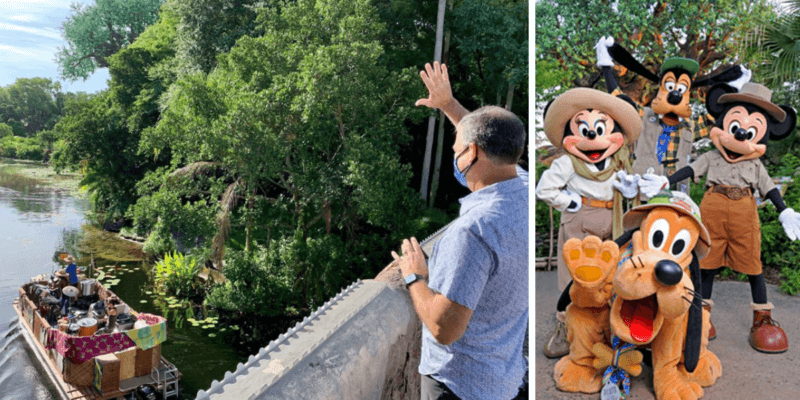 Character meet and greets will not be the same when Disney World reopens, but that doesn’t mean characters won’t be in the parks.

As we have seen at Disney Parks worldwide as they have opened up after several months of closures due to the pandemic, Disney is modifying the traditional character meet and greet and offering something new. Now, we finally have a sneak peek of what that’s going to look like at Walt Disney World Resort.

Read about something similar taking place in Hong Kong Disneyland and Shanghai Disneyland, as well!

In a new Instagram post, Walt Disney World Resort President Jeff Vahle has shared some of the new physical distancing protocol in place at Disney’s Animal Kingdom, which will be officially reopening to the public on July 11.

Below you can take a look at Vahle’s photos shared to Instagram, along with his caption:

Fantastic day with the Cast at Disney’s Animal Kingdom, watching as they train to deliver physical distancing in a manner that is distinctively Disney.
#DisneysAnimalKingdom
#ReadytoRoar
#DisneyCastLife
#ItsTimeForMagic

Fantastic day with the Cast at Disney’s Animal Kingdom, watching as they train to deliver physical distancing in a manner that is distinctively Disney. #DisneysAnimalKingdom #ReadytoRoar #DisneyCastLife #ItsTimeForMagic

The photo below shows Vahle waving to performers on the Discovery Island Drummers float, but similar floats will be carrying Disney characters throughout the waters of Disney’s Animal Kingdom:

The images below show social distancing measures in place and Cast Members abiding by health and safety guidelines:

Disney has shared online that the following entertainment will be available when Disney’s Animal Kingdom reopens:

So according to this list above, we will be able to see characters throughout the park, but in new and exciting ways. You may not be able to hug Mickey Mouse or dance with Timon from The Lion King, but this could be the next best thing.

You can click here to read our full article on how to find Disney characters at the Walt Disney World theme parks when they reopen.

We’ll continue to update Inside the Magic with more information on Disney World’s reopening as it is released. And if you plan to visit Disney’s Animal Kingdom this summer, have a wild time!