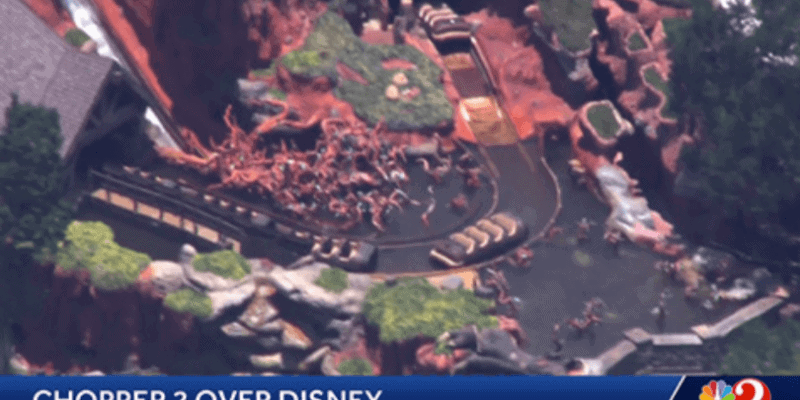 We’re just days away from the phased reopening of Walt Disney World.  Starting with Magic Kingdom and Disney’s Animal Kingdom reopening on Saturday, July 11th.  There is much to do as the parks prepare to reopen like preparing Cast Members and attractions.  Testing attractions are one of the biggest safety portions of a theme park, and one of the most spoken about attraction as of late is Splash Mountain.

Today, in a flyover aerial view, we can see that they are doing test runs of Splash Mountain in Magic Kingdom.  There are many guests who are getting ready to ride Splash Mountain in its original form at Walt Disney World for the last few times.

Splash Mountain isn’t the only attraction that is being test run today. Cast Members are hard at work preparing many of the attractions at both Magic Kingdom and Disney’s Animal Kingdom.

Here are some snapshot photos from the test runs that are being performed.

Attractions aren’t the only ones doing test runs today, but there’s been Character sightings too!  Walt Disney World announced that they would be changing Character Experiences.  As most of the Disney Parks that have reopened, Disney Characters have been doing contactless greetings so that we can still say hello our favorites.  Disney has always been known for their imagination, and it looks their imagination is running high with new ways for Characters to do Meet and Greets.

Below is the aerial video showing footage from the work Walt Disney World Resort is doing to prepare for reopening its doors this Saturday.

It's a busy week at Walt Disney World as some parks are set to reopen Saturday and stars from the NBA and MLS prepare to resume competition. https://bit.ly/3e1MvKk