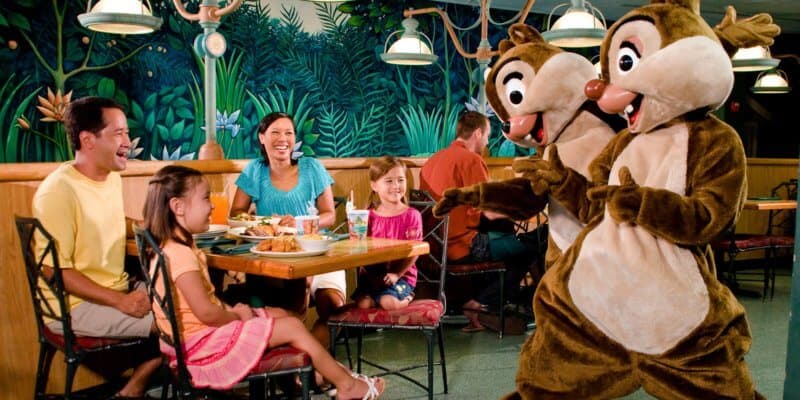 As Walt Disney World gears up for the reopening of its theme parks — Magic Kingdom and Disney’s Animal Kingdom on July 11 and Disney’s Hollywood Studios and EPCOT on July 15 — they are also implementing several changes and safety protools to keep their guests and cast members safe during this time.

A number of those changes aren’t just taking place within the theme parks, but also within the restaurants. On June 30th, guests can book a dining reservation for their favorite table service locations at Walt Disney Worldd, but something to keep in mind is the character dining.

We recently reported that Topolino’s Terrace at Disney’s Riviera Resort have hosted several changes in regards to both the overall experience with characters as well as changes to its menu. Well, it looks like Disney World is adding another modified character dining experience to the list.

Garden Grill over in EPCOT is now the first theme park restaurant that will reopen to guests with modified character dining experiences. As you can see in the screenshot above, Garden Grill Restaurant is listed with “Please note that Character Dining experience will be modified” right next to it.

Though Disney has not yet stated what exactly those modifications will consist of, we can expect it to be similar to the experience at Topolino’s Terrace at Disney’s Riviera Resort.

See Chip ‘n’ Dale and their Disney pals as you dig into family-style dining and revolve around vibrant views from Living with the Land.

Enjoy an ever-changing array of sights, and tastes too, as you slowly turn about this rotating restaurant.

At Garden Grill Restaurant, Guests of all ages are invited to imbibe visuals from Living with the Land—such scenes as a rainforest, farmhouse, thunderstorm, sandstorm and prairie—while indulging in an all-you-care-to-enjoy, family-style meal.

As of right now, Walt Disney World is planning on reopening in phases next month — Magic Kingdom park and Disney’s Animal Kingdom will open the gates on July 11 while EPCOT and Disney’s Hollywood Studios plans to open on July 15. The Resorts on property also will be opening up in phases with each resort having a different reopening date.

Remember that when Disney World reopens to guests next month, things at the theme park will look a lot different. Social distancing measures will be put in place, excessive cleanliness, encouragement of mobile orders, plexiglass, and as we previously mentioned, the elimination of character meet and greets.

What do you think of the modified character dining? Let us know in the comments below.