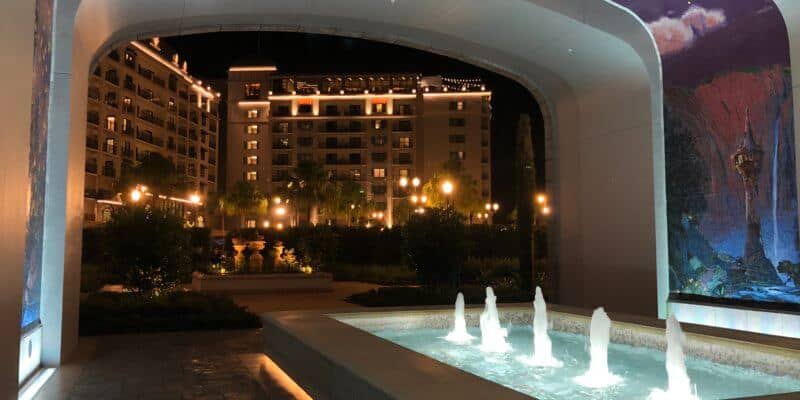 With excited anticipation, I opened up the My Disney Experience app and made reservations for my husband and me to experience a restaurant I was privileged to have announced to the world through my previous work as a Cast Member. Topolino’s Terrace — Flavors of the Riviera at Disney’s Riviera Resort was created to be a blend of the flavors one would find while dining in France or along the Italian Mediterranean coast — the Riviera. Match that with a deluxe Disney resort and a spectacular viewing location for fireworks and the combination is divine.

We walked up to the grand entrance of Disney’s Riviera Resort and were greeted with the familiar Disney Vacation Club “Welcome Home” lettering above the sparkling doors. As the doors opened, we experienced that familiar Disney magic as we saw carolers dressed in their Dickens finest crooning so beautifully for the small crowd that had gathered in the modern lobby with an old-world flair. Even the Cast Members were humming along, and there was definitely Christmas spirit was in the air.

I knew this building so well, and yet, had never stepped foot inside. Making a beeline for the gift shop to see how the treasure’s untold had actually turned out, I wanted one of everything! The images of Dapper Mickey and Minnie Mouse stamped across shirts, dresses and hats were so perfectly reminiscent of Walt and Lillian’s travels to the Riviera — a favored vacation spot for the Disneys for decades and what ultimately led to the theming of this resort.

Before we made our way up the elevator, we stopped by the Voyageurs’ Lounge to take in some Disney family treasures that also tell the story of Walt’s travels and the impact his souvenirs had on Disney stories we know and love today.

Did you know he shipped back the books of the stories of Pinocchio and Peter Pan before his return from Italy? These are only two of the examples of stories Walt found on his travels that later became characters we love and know so well. Check out these pieces, and a pictorial of his travels, in this lounge to get the feel for how Walt’s travels impacted his storytelling.

And then it was time. We made our way to the East Elevator bank and up to the 10th floor. The restaurant had been officially open for only four days and we ran into friends of ours as we were checking in for our reservation. Disney Vacation Club properties truly are a home away from home!

We had some time before our table was ready, so we wandered over to the lounge, a beautiful bar area just to the right when you enter the restaurant, with the open kitchen just to the left. And then I remembered that we could go out on the terrace to wait and one of the Cast Members said she’d let them know where to find us.

The view of the resort itself, from the terrace, was breathtaking. The terrace was such a welcoming setting, too, even though there was an unusual Florida chill in the air. We spoke of how we couldn’t wait to come back on a slightly warmer night and enjoy this atmosphere.

We were called in to our romantic table by the window, overlooking the lake, the East Tower and the resort beach. Another beautiful view and then it was time — finally time to order some of this newly designed twist of French and Italian cuisine.

What’s on the menu?

The drink menu is extensive with French and Italian wines and beer, and there were ample options for crafted cocktails. I chose the French Rose ($14), that carries a refreshing grapefruit twist, and my husband enjoyed an Italian beer, Peroni Nastro Azzurro Lager ($8.25). Our engaging waiter, Reba, brought yummy French-esque, twisted bread and two types of olive oil for dipping. One was made of green olives from Italy and the other, a richer, stronger oil made of black olives from France, in keeping with the theme. I favored the Italian oil and my husband favored the French oil, which worked out nicely.

We opted for an Antipasto, Burrata con Panna (black winter truffle, Italian olive oil, seed lavosh and sea salt: $18) and a Starter, Winter Pumpkin Ravioli (wild mushroom conserva, brodo, pumpkin seed oil: $16) to share. We devoured them both. The sauce from the ravioli was also excellent for dipping the bread, even encouraged by our waiter, who left the plate for us to do so once the ravioli was gone.

For entrees, my husband won with his choice. He ordered King Salmon Mi-Cuit (artichoke risotto, sauce vierge, upland cress, French olive oil: $46). Our waiter had suggested the Classic Sole Meuniere ($50) or the Filet Mignon ($54), a Canadian beef, the same filet as you’d find at Le Cellier Steakhouse in the Canada Pavilion at Epcot, as he went over the lovely new menu with us.

Wanting fresh pasta after seeing the pasta hanging near the hostess stand, I ordered the Linguine Scampi (shrimp, San Marzano tomatoes, garlic, lemon, Italian olive oil, verbena, bottarga: $36), even though warned the heads were still on the shrimp, I went for it. Should have gone with the Rigatoni. The pasta itself was excellent, but the shrimp heads were difficult, usually left on for flavor, but that was not my experience. Also, the tomatoes and the lemon taste of the sauce were good but needed something more.

Our friend’s we’d seen as we entered had the Rigatoni and raved about it. The dish my husband ordered, the Salmon and risotto was delectable! I kept stealing offered bites to experience the bursts of incredible flavors. I can’t wait to go back and order my own. And next time, I’ll listen to the recommendations.

The only sadness was that we were too full for any of the yummy desserts, including Warm Valrhona Chocolate Cake, Apple Tarte Tatin, Pistachio Mousse, and several other options. After having just visited the actual French and Italian Rivieras, it was fun to see the menu also offered House-made Limoncello. We also can’t wait to go back and try these desserts paired with the new Riviera Resort Blend coffee or one of the many Dessert Wines from these regions.

And then we saw the flash in the window. I looked at my watch and it was time for fireworks! We were on the wrong side of the restaurant to see the fireworks, while seated at our table, so we made our way back out to the terrace.  The view was unobstructed, looking out past the Disney Skyliner station toward Disney’s Hollywood Studios, you could see the Tower of Terror lighting up and see the intermittent fireworks, with the glow of the lights of Disney’s Caribbean Beach Resort reflecting off the water in the foreground.

Next up, Epcot Forever! I looked back toward the u-shape of the resort towers, looking over the West tower. Beyond the West tower, that holds the Tower Suites, the countries of Epcot lit up magically at just that moment. It caught my breath as one lone spark flew into the sky. It made it so easy to see through the darkness and realize you could see all of the World Showcase from this vantage point. The silhouette of the tower holding the Tower Suites was in perfect alignment in the foreground as the fireworks continually lit up the sky. Beneath us, you could catch a glimpse of the gorgeous mosaics and fountains leading to the Skyliner.

With two separate shows so close in timing, the music for these shows is not piped in. However, this was okay, even welcomed. On this night, we heard familiar Christmas songs with beautiful harmonic, instrumental French stylings, and it was just right. The terrace creates such a relaxed, romantic atmosphere. We hung out by the hidden Mickey scrolls of the terrace walls watching the skies light up.

I highly recommend Topolino’s Terrace for a romantic night out. We saw several families enjoying their time as well, but for the two of us, it was perfect!

It was time to end our night and we made our way down to the first level. We walked out to see the mosaics of Tangled and Peter Pan before heading home. As I turned to go, Auld Lang Syne began to gently play over the outdoor speakers and it felt appropriate. Riviera Resort, you did not disappoint, my friend. You are everything I hoped you would be.

What are you looking forward to trying at Disney’s Riviera Resort? Ready to book your trip? Our friends at Academy Travel are ready to assist!

Comments Off on Op-Ed: Topolino’s Terrace tops my list for Disney Dining