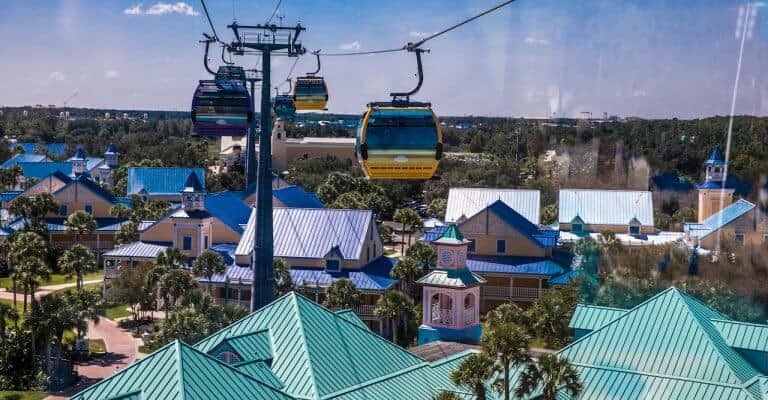 The new transportation system celebrated its opening to Guests on September 29, and after a rocky start that took the internet and social media by storm and involved a crash, Guests suspended for hours aboard the gondolas, and impacting Guests on their Disney trips, the Skyliner is celebrating serving more than one million passengers in less than a month.

And perhaps one of the best things about the Skyliner is that Guests need no FastPass to board a cable car-style gondola and experience scenic views of the Disney World Resort.

The Skyliner station at the International Gateway is just one of the conveniently located stations that’s part of the new system. It is located only within walking distance of Disney’s beautiful and exciting Boardwalk entertainment district, , Disney’s Beach Club Resort, and Disney’s Yacht Club Resort.

The state-of-the-art Skyliner gondola transportation system allows Guests onboard to enjoy views never before enjoyed by Guests of the Walt Disney World Resort. It was first announced at the 2017 D23 Expo by Chairman of Disney Parks, Experiences and Products, Bob Chapek, along with more than 20 other additions, improvements and changes in the works for Walt Disney World, which is set to celebrate its 50th anniversary in October 2021.

Want to plan a trip to Disney World so you can ride the Skyliner for yourself? Click here for a free, no obligation vacation quote from Academy Travel!

Have you experienced a ride aboard Disney’s Skyliner gondola system yet? What did you like about the Skyliner, and what do you think can be improved upon? Let us know in the comments section below.