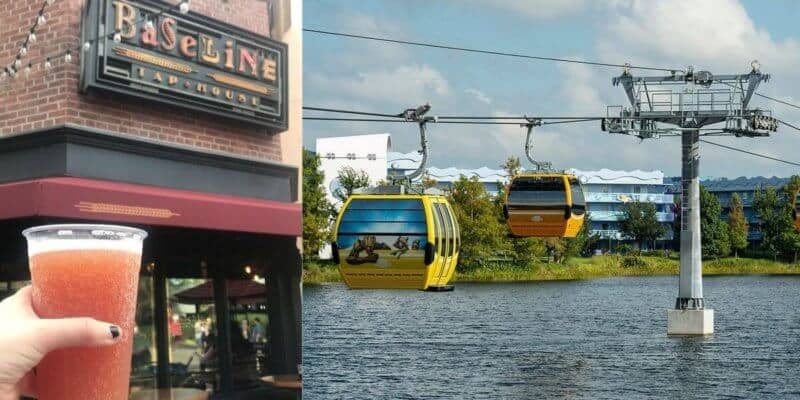 On September 29, Walt Disney World’s newest mode of transportation, the Disney Skyliner, opened to the public and guests have been able to experience beautiful views of the Disney landscape like never before.

But that’s not all guests will be able to experience while taking advantage of Disney’s newest transportation. There are several stops on the Skyliner line, which include lots of yummy treats and delicious drinks. We put together a guide for a Disney Skyliner “Pub Crawl” so you can stop and enjoy a salty snack alongside an adult beverage while enjoying your day in the parks.

Let’s begin at Disney’s Hollywood Studios where you can stop and grab a snack in between visiting Star Wars: Galaxy’s Edge and riding  The Twilight Zone Tower of Terror.

Check out Baseline Tap House, one of my all time favorite spots, and grab a salty Bavarian pretzel with Beer-Cheese Fondue and Spicy Mustard paired with an ice cold Ace Space Bloody Orange Hard Cider.

Calling all 50s fans! Sip on specialty cocktails in the Tune In Lounge, located next door to the popular restaurant, 50s Prime Time Cafe.

Disney’s newest Disney Resort will open on December 16, 2019 and will include a stop on Disney’s Skyliner line and our pub crawl!

You can treat yourself to a sweet pastry paired with a nice glass of wine at the Le Petit Cafe. The cafe will also offer European-style coffee for those who need a boost of energy to get through the rest of our pub crawl!

Everyone knows Epcot is known for drinking around the world, and with Disney’s Skyliner pulling right into Epcot’s International Gateway, it’s the perfect opportunity to hit World Showcase on our pub crawl.

Sit back, relax, and raise your glass. I recommend trying a Grand Marnier Slush or the Kir Royale which is Champagne and Blackberry Liquor.

From France to England. Located right next door, stop by Rose and Crown Pub. This adorable England style pub is the perfect spot for a wide selection of beers on tap or a nice glass of wine. You can also snack on some homemade seasoned crisps or English chips.

If you’re a fan of chips and salsa and margaritas, then the next stop will excite you. After finishing up your beer at Rose and Crown Pub, head over to Mexico and swing by La Cantina de San Angel. Pair fresh-made Guacamole and Tortilla Chips with a Blood Orange Margarita on the Rocks. I promise you won’t be disappointed.
If you’re in the mood for another margarita, I recommend heading right across the way to La Cava del Tequila. Guests can choose from over 200 tequilas, top-shelf cocktails, Mexican beer or wine. This wonderful tequila bar also offers light snacks like guacamole or queso.

After you finish drinking around the world, hop back on the Disney’s Skyliner and head over to the sister resorts, Art of Animation and Pop Century Resorts.

The Drop Off Pool at Art of Animation

The pool bar at Art of Animation has a ton of drinks to choose from. Personally, I love the Piña Colava, a twist on the classic Piña Colada. This frozen drink consists of Bacardi Raspberry Rum blended with flavors of Coconut and Raspberry Purée. You can also get a regular Piña Colada if raspberry isn’t your thing.

There are two drinks at the Petals Pool Bar that I recommend trying on this pub crawl. First, sip on the Poolside Iced Tea which consists of Absolut Vodka, Bacardi Superior Rum, Beefeater Gin,Corazón BlancoTequila, Cointreau, and Sweet-and-Sour topped with Coca-Cola.

Second, the Captain’s Mai Tai which is a mix of Captain Morgan Original Spiced Rum, Bols Amaretto, and Tropical Juices topped with a float of Plantation Original Dark Rum.

We are ending our Disney’s Skyliner pub crawl at the beautiful Caribbean Beach Resort. With stunning views and a relaxing atmosphere, there’s no better place to sit back and relax after a long day.

The Disney Skyliner is now open to all guests and is used for connecting Epcot and Disney’s Hollywood Studios with the four surrounding resorts on our Disney Skyliner pub crawl — Disney’s Art of Animation, Disney’s Pop Century, Disney’s Caribbean Beach, and the soon to be Disney’s Riviera Resort, which is set to open on December 16, 2019.

Which Disney Skyliner pub crawl stop are you looking forward to most? Let us know in the comments.