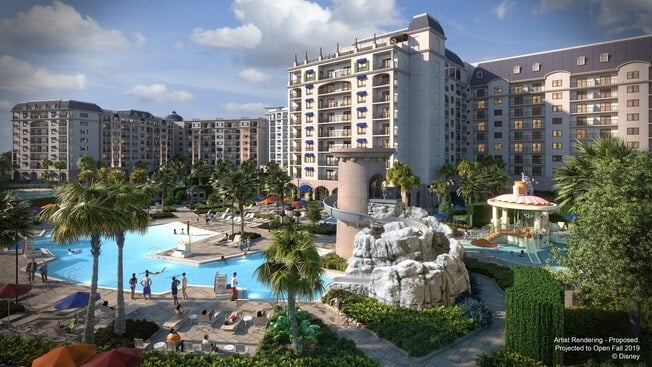 This week, Disney shared a closer look and more details about the European-inspired amenities in store for Disney’s Riviera Resort — mainly, the luxurious pools!

The image above showcases the Riviera Pool, which is the resort’s feature pool, along with S’il Vous Play, an interactive water play area. The Riviera Pool offers the “relaxing feel of lounging around the Southern European coast where you can soak up the sun in lounge chairs or hang out beneath a colorful sun umbrella,” says Disney. “Although, the inviting waters may call you to swim and play, or even take a winding ride down a stone turret slide.”

For younger guests, S’il Vous Play offers a whimsical fountain featuring characters from Disney’s “Fantasia.” According to Disney, “this area draws inspiration from the grand public fountains seen throughout Europe — with its patina and limestone-inspired design making it feel like a place where visitors might have gathered to share a memory or a wish along the European Riviera.” Nearby, a movie lawn offers a gathering place to watch fan-favorite Disney films while lounging poolside.

The Beau Soleil pool promises a more tranquil poolside setting. “At Beau Soleil leisure pool, you will feel like you’ve escaped to the tranquil European coast as you are surrounded by a natural, lush-green wall, creating a semi-private pool experience,” says Disney. Nestled in a grove of tropical palm trees, this pool offers a place to sunbathe or rest beneath shaded seating areas.

The waterfront promenade provides a place to take a relaxing stroll while enjoying the European-inspired landscapes of the resort. You’ll also be able to meander to the Disney Skyliner gondola station, where you can catch a ride to Epcot International Gateway or Disney’s Caribbean Beach Resort and on to Disney’s Art of Animation Resort, Disney’s Pop Century Resort, or Disney’s Hollywood Studios. At Disney’s Rivera Resort, you’ll pass through a tunnel archway with sparkling water features and connect to a station where you can begin your journey on the Disney Skyliner.

Disney’s Riviera Resort has begun accepting reservations for stays beginning in December 2019, and with new details shared by Disney, this resort is shaping up to be one of the most enticing places to stay at Walt Disney World.

As previously shared, the resort is slated to become the 15th Disney Vacation Club property and it’s inspired by Walt and Lillian Disney’s travels throughout Europe and along the Mediterranean coastline from France to Italy. The resort features an early 20th-century design with “grand archways, porticos, cascading water features, towers, and terraces,” says Disney.

One of the most exciting aspects of the new resort is Topolino’s Terrace – Flavors of the Riviera, the signature table-service rooftop restaurant. In Italy, Mickey Mouse is known as Topolino, and this restaurant will serve dishes infused with Italian and French flavors. While dining, guests can enjoy views of the nighttime spectaculars taking place nearby at Epcot and Disney’s Hollywood Studios.

For a more foodie-centric show, guests can also watch their meals being prepared in the exposed kitchen or on the wood-burning grill. As far as beverages go, France and Italy are known for their wines, so of course, there’s an extensive wine list with varieties from the Mediterranean coast. For breakfast, Topolino’s Terrace offers exclusive Disney character dining inspired by the Riviera.

Another dining option, Le Petit Café, is located in the lobby. In the morning, guests can stop by for fresh-brewed coffee, while at night, it turns into an inviting wine bar.

Located near the featured pool, Primo Piatto (which means first course in Italian) is a quick-service location inspired by the chic restaurants along the Riviera promenades. Additionally, Bar Riva is an open-air pool bar decorated with seaside-inspired white and blue accents.

Now that we’ve covered the dining options, here’s what’s in store for accommodations. The new resort features approximately 300 family-friendly vacation homes, including deluxe studios, one- and two-bedroom villas, and grand villas that sleep up to 12 guests each. Tower studios, an all-new room category, sleep two guests each and include a private balcony and seating for two. These tower studios sound perfect for a 2-person Walt Disney World getaway! For a slightly larger group, the deluxe studios sleep five people and include kitchenettes.

“One-bedroom, two-bedroom and grand villas will feature large, fully equipped kitchens with dining space open to a living area. Villas will also feature an en-suite luxury bathroom, including a freestanding soaking tub and walk-in shower, as well as a private porch or balcony and a laundry area with a washer and dryer,” says Disney.

If you’re looking forward to using the new Disney Skyliner gondola system, which begins transporting guests in the fall, Disney’s Riviera Resort may be even more appealing. The resort will have a dedicated Disney Skyliner station and connect Disney’s Hollywood Studios and Epcot to Disney’s Art of Animation Resort, Disney’s Pop Century Resort and Disney’s Caribbean Beach Resort.