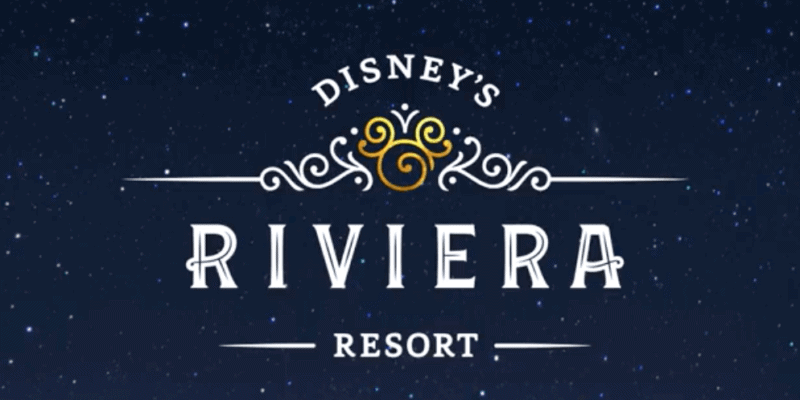 Disney Vacation Club has released new concept art and video of Disney’s Riviera Resort. The new art and video reveals the new resort’s logo and shows views of the hotel’s grand entrance and front facade, which is set to be complete by Fall 2019.

Disney Vacation Club posted the 18-second video on their official Facebook page yesterday. The video begins with a stunning graphic rendering of the new resort, followed by text that reads: “Inspired by Europe” and “Imagined by Disney.” The graphic video then goes on to reveal the official logo for the upcoming resort, which can be seen below.

Back in November, at D23’s Destination D: Celebrating Mickey Mouse, was the last time new details were revealed of the upcoming resort. This included a closer look at the resort’s theming, which is inspired by the European grandeur Walt Disney experienced during his travels on the Mediterranean coastline.

Back in 1935, shortly after Mickey Mouse was created, Walt Disney took a break from production of “Snow White and the Seven Dwarfs,” and during this time, Walt, Lillian, Roy, and Edna Disney took a grand tour of Europe. This experience impacted Disney’s storytelling for decades as this trip was where Walt and Roy experienced castles and colorful, fairytale villages. On this trip, Walt fell in love with every part of Europe — its art, architecture, food, and stories.

The D23 event was also where the new property’s location was discussed, which is said to give guests a great view of Disney Parks’ fireworks and easy access to the Disney Skyliner, which will have a station at the resort. The resort is the proposed 15th Disney Vacation Club property.

What are your thoughts of this new concept art released by Disney Vacation Club of the resort? Let us know in the comments below!