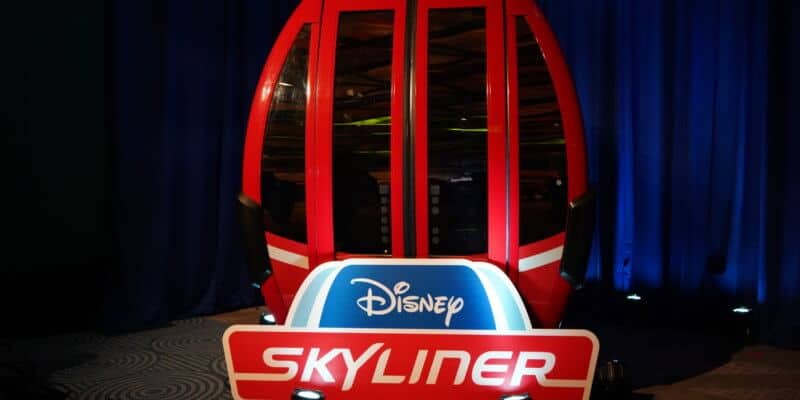 During this past weekend’s D23 Destination D: A Celebration of Mickey Mouse event, Disney officially revealed one gondola coming to the Disney Skyliner transportation system at Walt Disney World. Here is an up-close look at the craft, which will transport Guests over the Walt Disney World Resort starting in Fall 2019.

Colored in a vibrant red, the gondolas will be an eye-catching sight hovering over the Walt Disney World Resort theme parks and hotels. In addition to this craft’s bright red base, it also features white trim lines, a Disney Skyliner logo on the back in white, and a fun animated portrait of Pluto looking out the back of the craft at a bird. 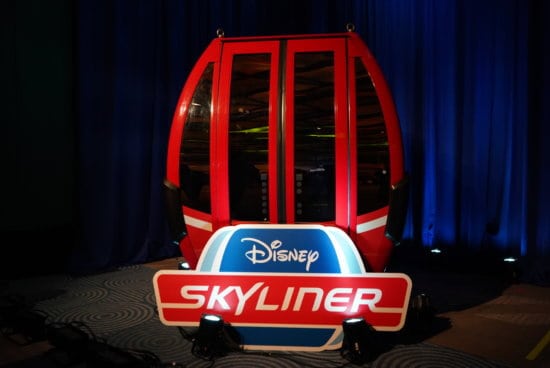 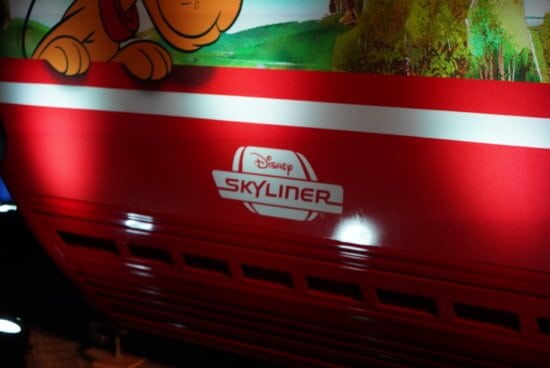 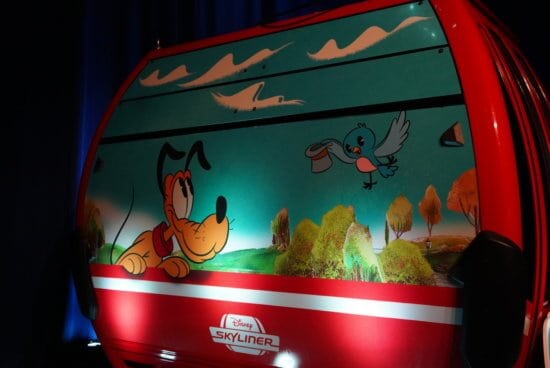 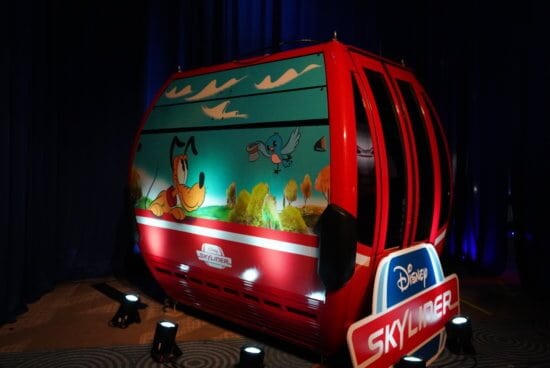 Looks inside the gondola were prohibited as a security guard stood outside the craft. The gondola windows seemed to have been darkened for the event as they completely blacked out views of its interior.

In an earlier report, Disney revealed that select gondolas would have iconic Disney characters incorporated into their exterior design to give the appearance that a Disney pal is riding along with Guests, such as characters from the ‘Fab Five,’ figures from Disney attractions, movies, and more. Below is the concept art of what the designs will look like on the gondolas. 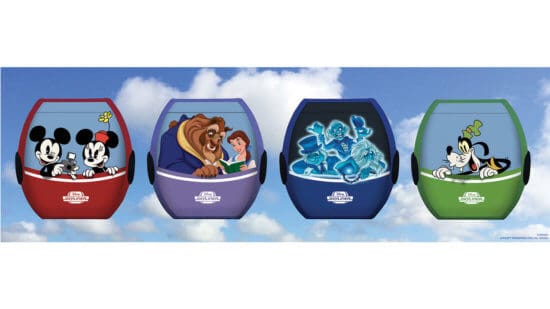 In a report by Orlando Sentinel, it was confirmed by a Walt Disney World spokeswoman that the gondolas would not have air conditioning for its Guests. The spokeswoman stated that the gondolas were “specifically tailored to provide a comfortable ride for our Guests in the Florida climate.” The spokeswoman explained that instead of air conditioning, the crafts would use cross-ventilation for sufficient airflow and reflective windows to prevent direct sunlight.

The support towers for the new system have been coming to completion as reinforced cables are now being installed along the towers to connect them. Disney recently revealed that this process would take place over several months as teams install the miles of cable between towers.

When the gondolas become fully operational, they will give Guests to Walt Disney World the ability to move between Disney’s Art of Animation, Pop Century, and Caribbean Beach resorts and the new Disney Riviera Resort, Disney’s Hollywood Studios, and the International Gateway at EPCOT.

The gondola was revealed during the “…it was all started by a mouse” panel with Bob Chapek, which kicked off the weekend-long event. During the panel, Bob Chapek, Chairman of Disney Parks, Experiences and Consumer Products, discussed the reveal of the gondola, along with many other changes coming to the Walt Disney World and Disneyland Resorts over the next few years.

Be sure to check out our other exciting reports from this past weekend’s D23: A Celebration of Mickey Mouse event, which includes the reveal of EPCOT’s Guardians of the Galaxy roller coaster ride vehicles and exciting new details of Star Wars: Galaxy’s Edge attractions and the upcoming Star Wars Resort.

Are you excited to journey the skies over Walt Disney World in Fall 2019 when the Disney Skyliner transportation system debuts? Let us know in the comments below!