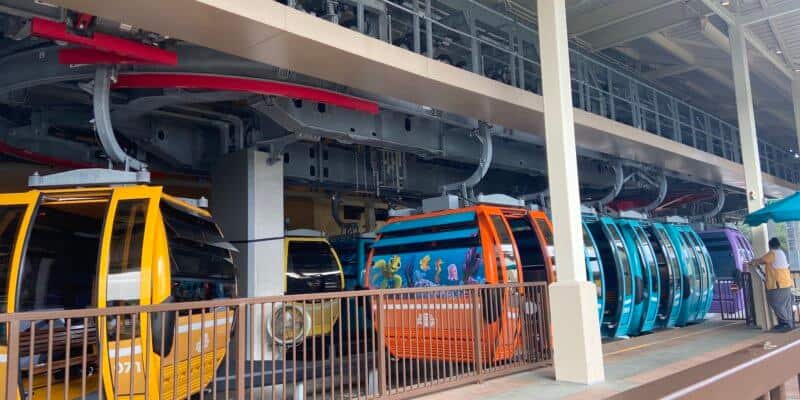 The Skyliner moves rather quickly and helps Guests save time when traveling to their theme park, especially considering how long Disney bus lines can be at times. The Disney Skyliner is constantly moving and loading Guests, meaning Guests do not often feel as though they are waiting in line for very long as they prepare to board their personal Skyliner gondola and head to their destination.

That being said, modes of transportation — even transportation at Walt Disney World — can have mishaps and break down every so often. There could be unforeseen circumstances for a Disney bus, the Monorail could halt when running, and even the Disney ferry or Friendship boats can experience a malfunction. Needless to say, the Disney Skyliner also undergoes technical difficulties from time to time. Today seems to be one of those instances.

Theme park reporter Thecalibae (@thecalibae) took to Instagram to repost a story from Next Stop Main Street (@nextstopmainstreet) which an image of Disney Skyliner gondolas that appear to have collided at the loading dock. According to Next Stop Main Street’s story, two gondolas “banged into each other and glass shattered.”

The story continued to say “I feel bad for everyone stuck on there! It’s pretty warm.”

While the collision is being addressed, this is a situation that would cause the Disney Skyliner to have to pause operations as Disney Cast Members work to get Guests to safety and call in the proper reinforcements for help. It has not been reported that there were any Guests injured in the accident.

The collision happened at the Skyliner station at Disney’s Hollywood Studios, so be aware that you should always check with a nearby Cast Member and pay attention to signage when attempting to board the Disney Skyliner if unforeseen circumstances like this have occurred.

Since the news was initially reported, Disney has commented on the situation to provide more clarity regarding what occurred. According to ClickOrlando:

Recently, we reported that there was a slight technical issue that left Guests stuck in the air for a small amount of time. This is something that tends to happen on the Disney Skyliner every so often. Typically, you are back moving quickly, but there have been instances where Guests were such for hours due to issues that may arise (like inclement weather or other difficulties) that can lead to disruptions in transportation.

Disney Cast Members will let Guests know if they are unable to board the Disney Skyliner due to circumstances like these. If you are looking to head to EPCOT or Disney’s Hollywood Studios via the Disney Skyliner and the Skyliner is down at any time, a Disney Cast Member at the Skyliner station will let you know or there will be proper signage to prompt you to use another mode of complimentary Disney transportation.

The following Disney Resort hotels are on the Disney Skyliner transportation line:

As always, it is important to remember that if you are staying at these resorts, the Skyliner is not the only method of transportation available to you. If you are afraid of heights or do not want to ride for any reason, buses are always available, though be sure to plan accordingly as the bus schedule can vary depending on the theme park you are attempting to get to.

Stay tuned to Inside the Magic for the latest Disney news.

Update: The Disney Skyliner has resumed operations since this article was originally published.