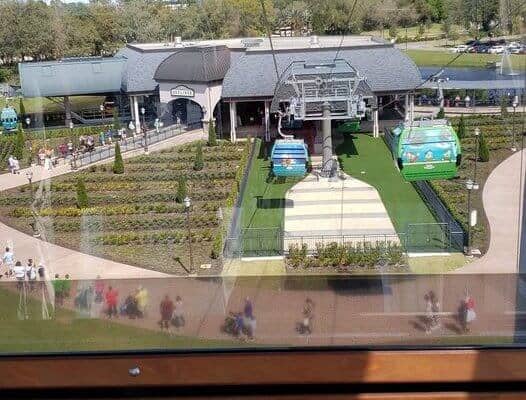 According to reports from Disney Guests across various social media platforms, the Disney Skyliner that transports above Walt Disney World experienced some technical difficulties today, causing some Guests to be stuck on board for approximately one hour.

Disney Skyliner is the latest transportation system to be added to the Walt Disney World Resort that gives Guests easier access to Disney’s Hollywood Studios, and EPCOT from various resort hotels.

@WDWGuestService Yikes! We’re stuck!! Any ETA on getting the Skyliner going again? #DisneyWorld#Disney

Disney World Guest Sonia Melissa provided our team at Inside the Magic with an account of her experience. She said that she was stuck on the Disney Skyliner with her daughter for approximately one hour while on the way to EPCOT, as today is the first official day of the Taste of EPCOT International Flower & Garden Festival. Sonia said that, according to Disney, the Skyliner was experiencing some technical difficulties which caused the delay. However, she was also told that a technician was working on the issue.

“My daughter was more nervous being up there. It was our 1st time. But thankfully it’s a beautiful day so it was nice and breezy with a beautiful view,” Sonia shared with us.

After around one hour of being stuck on board the Disney transportation system, Guests including Sonia and her daughter were able to get off and boarded a bus to EPCOT.

“They did give us water and a $25 gift card when we got off,” Sonia said, sharing with us a photo of her daughter enjoying her snack (pictured below).

As with any Disney World transportation system, occasional issues may arise. The Disney Skyliner has faced its fair share of mishaps, but it is clear that Disney makes an effort to keep Guests safe and get them to their destinations as soon as possible whenever these issues may occur.

The Disney Skyliner is the newest transportation system at Walt Disney World. It is popular as it carries Guests in themed gondolas high above the skies of Walt Disney World and can take Guests from some hotels to EPCOT or Hollywood Studios.

While many Guests might know the iconic Disney Monorail, the Skyliner is quickly becoming a fan favorite in the free transportation that is offered within the Walt Disney Resort.

If you or someone you are traveling with is not a fan of heights Disney does offer other means of free transportation. You can take a Disney Bus which is extremely useful for getting around Disney World property as they stop at each and every Disney resort. Additionally, you can take a boat which is offered at various resorts on property. Both of these are quick, easy, and free transportation methods to move around the Walt Disney World Resort if the Monorail or Skyliner are not your style.

Personally, I enjoy the breeze and views from the Skyliner and while the Skyliner may stop periodically in the air for a few minutes as loading and unloading allows, it rarely leaves Guests waiting in the sky for too long. As it is still a new form of transportation at Walt Disney World there appears to still be a few bugs that Disney is working out. Overall though, the Skyliner is an enjoyable experience for many!