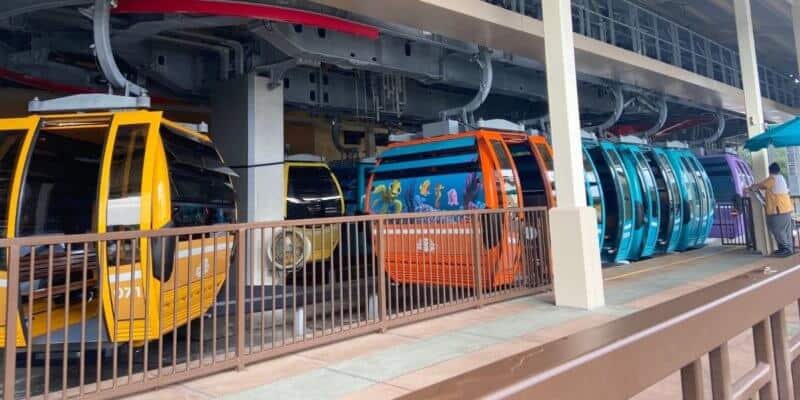 Today, the Disney Skyliner is experiencing technical difficulties, causing some Guests to be stuck mid-air for more than 30 minutes.

The gondola transportation system is experiencing some downtime today, so it is important to check with nearby Cast Members regarding Disney Skyliner operations if you are on vacation and wanting to use the gondolas to get to and from the theme parks and resorts.

Related: Aerial Photos Give Us Inside Look At Disney Skyliner

One Walt Disney World Guest took to Twitter to express her frustrations, saying, “OMG .. stuck on Skyline going on 30 minutes… im a T1 Diabetic.. alone … they need to fix this ASAP …”

@WaltDisneyWorld OMG .. stuck on Skyline going on 30 minutes… im a T1 Diabetic.. alone … they need to fix this ASAP …

The Disney Skyliner, like other transportation options at Disney World, is no stranger to issues, so a situation like this is not uncommon. However, on most days, the gondolas run like clockwork without any major reported problems.

It is also important to note that sometimes delays are caused by Guests with wheelchairs or strollers who are boarding or getting off of the transportation system since this is one of Disney’s accessible mode of transportation. However, today’s issues — though still not yet explained — are likely more than that, since the Skyliner is now reportedly down and Guests are unable to ride it at this time.

In case you haven’t ridden the Skyliner yet, each gondola cabin brings Disney style in one of eight vibrant colors and several Disney themes (from Mickey and the Gang to Disney Animation Classics like Beauty and the Beast to live-action films like Pirates of the Caribbean or Star Wars). There are a total of five loading stations along the line and nearly 300 Skyliner cabins.

Have you ever ridden the Disney Skyliner? Let us know your preferred method of transportation in the comments below.