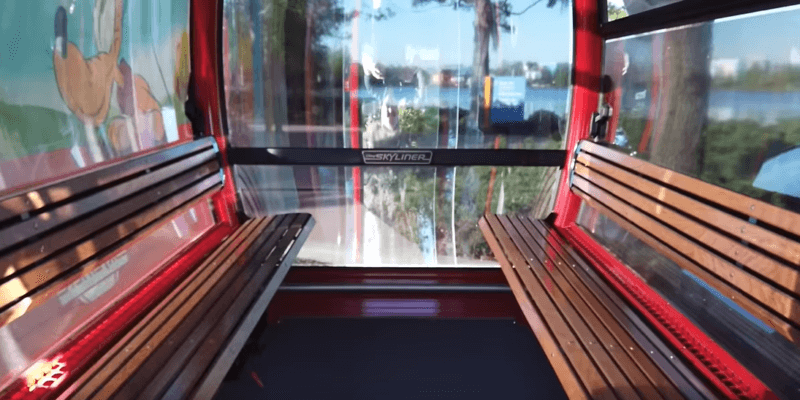 Transportation to and from the theme parks and resort hotels is something that has a big impact on a Disney vacation. And with the new Disney Skyliner coming to Walt Disney World, Disney is providing guests with even more ease and comfort than ever. Keep reading for an inside look at the interior of Disney’s Skyliner gondolas.

Local Florida news station WFTV was recently given a preview of Disney’s new Skyliner transportation system, which will debut at Walt Disney World later this fall. The 300 Skyliner cabins, which will feature 22 different character facades, can each transport up to 10 guests (including wheelchairs) to and from Disney’s Hollywood Studios and Epcot theme parks, as well as four resorts (Disney’s Caribbean Beach Resort, Disney’s Riviera Resort, Disney’s Pop Century Resort, and Disney’s Art of Animation Resort). Over the past several weeks, Walt Disney World has been testing the gondolas, and guests across the theme parks and resorts have been itching to find out more about what this new transportation experience will be like.

“With the Disney Skyliner, we’re really creating magic in the air,” said Disney’s Senior Vice President of Resorts and Transportation Thomas Masloum. “The views you’re going to get from there are unparalleled. You’ll never forget the experience.”

First announced at D23 Expo back in 2017 by Bob Chapek, the chairman of Walt Disney Parks, Experiences and Consumer Products, the Disney Skyliner transportation system has come a long way. Over the past year, Walt Disney World has worked to construct and install the towers, reinforced cables, and Skyliner stations at the several theme parks and resorts that the Skyliner will service. Now that we’re getting closer and closer to the grand reveal and opening, we can hardly wait to try these gondolas for ourselves.

“I think the most exciting part is the story, the gondola cabin themselves will feature classic Disney stories, both old and new. It should just be a wonderful experience as the Disney characters ride along with them,” said Disney Imagineering principal architect Dean Huspen.

Disney also shared that they have created a comfortable environment for guests using the Skyliner. The cabins have been specifically designed for the Florida climate, with cross-ventilation for air flow and special reflective windows to prevent direct sunlight.

Check out Disney’s inside look at the new Skyliner gondolas coming later this year to Walt Disney World:

Are you excited to try out Disney’s Skyliner when it debuts this fall? What’s your favorite way to get around Walt Disney World? Let us know in the comments!