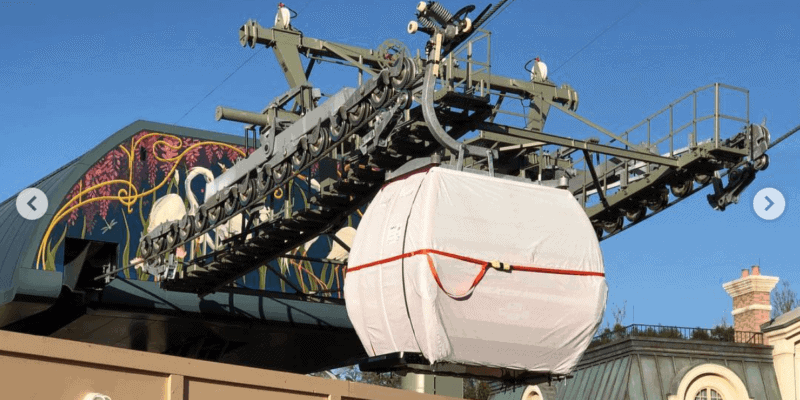 Disney has revealed several new gondola designs coming to the Disney Skyliner when it premieres at Walt Disney World later this year.

Based on some of The Walt Disney Company’s most beloved films and characters, new designs include graphics inspired by Mickey Mouse, Minnie Mouse, Pluto and Chip & Dale. Additionally, several of Disney’s animated films are represented, including Beauty & the Beast,” “Frozen,” “Lilo & Stitch,” “Moana,” “Peter Pan,” “The Princess and the Frog,” “Ralph Breaks the Internet,” “Snow White and the Seven Dwarfs” and “Zootopia.”

Below, you can see newly released designs with Jessie, Buzz Lightyear and Woody from Disney/Pixar’s “Toy Story,” R2-D2 and C-3PO from Lucasfilm’s’ “Star Wars,” Daisy and Donald Duck and Star Lord and Gamora from “Guardians of the Galaxy.”

The other themed gondolas that will be part of the system include:

As most Disney fans probably already know, this new transportation system has been under construction for about a year, and to have a gondola up on its cables is a huge milestone. Here is an in-depth look at the construction status of the Disney Skyliner from Jordan Mathews from Walt Disney Imagineering.

The new high-flying transportation system coming to the Walt Disney World resort has officially started testing, as the first Skyliner gondola has been installed at the International Gateway at Epcot.

First announced at D23 Expo back in 2017 by Bob Chapek, the chairman of Walt Disney Parks, Experiences and Consumer Products, the Disney Skyliner transportation system has come a long way. From the installation and construction of its towers, reinforced cables and its stations at multiple Disney Parks and resorts, we now have a view of one of the system’s crafts in the sky.

However, the view is somewhat obstructed, as the gondola is covered in tarp to hide the appearance of the craft. This is most likely due to the fact that the system is still under construction.

Disney first gave us a look at the gondolas last November at D23 Destination D: A Celebration of Mickey Mouse. During the “…it was all started by a mouse” panel, which revealed details of some of the changes coming to the Walt Disney World and Disneyland Resorts over the next few years, Chapek unveiled the vibrant red gondola, which appears to be the same gondola hanging at the International Gateway at Epcot.

Earlier reports by Disney revealed that select gondolas will have iconic Disney characters incorporated into their exterior design to give the appearance that a Disney pal is riding along with guests, such as characters from the ‘Fab Five,’ figures from Disney attractions, movies, and more. Below is concept art of what the designs will look like on the gondolas

As cute as the gondolas appear, there is question on how comfortable a ride on each craft will be for guests as it was found by the Orlando Sentinel that the crafts will not be featuring air conditioning.

In a report by the Orlando Sentinel, it was confirmed by a Walt Disney World spokeswoman that the gondolas will not have air conditioning for its guests. The spokeswoman stated that the gondolas were “specifically tailored to provide a comfortable ride for our guests in the Florida climate.” The spokeswoman went on to explain that instead of air conditioning, the crafts will use cross-ventilation for sufficient airflow and reflective windows to prevent direct sunlight.

The Disney Skyliner transportation system is still under construction as none of its stations have been completed, nor has any of the system’s other gondolas been installed on its reinforced cables. The system is said to become fully operational sometime this Fall.

Are you excited to experience the Disney Skyliner? Let us know in the comments below!