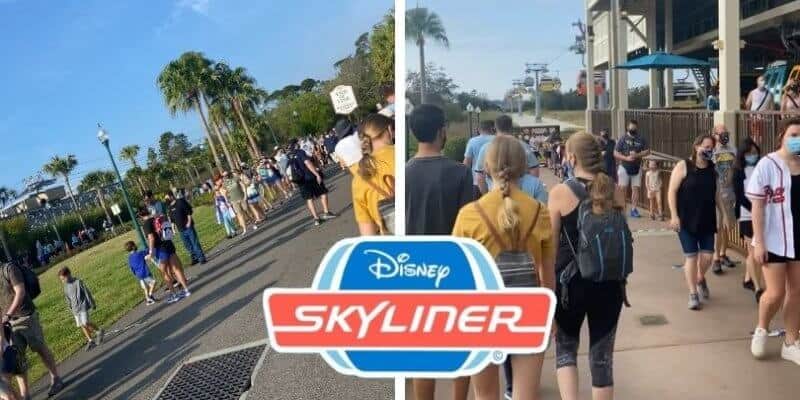 Guests can board Disney’s Skyliner — a complimentary mode of transportation — and glide past one-of-a-kind views of waterways, woodlands, and two Walt Disney World theme parks — Disney’s Hollywood Studios and EPCOT. The new Skyliner transposition is in constant motion, which means Guests arrive at their destination within minutes! Relax along the way, take in the views, and you will be there before you know it.

However, the new mode of transportation, though the ride itself only a few minutes, the lines to board the Skyliner are often quite long. In fact, the Skyliner draws in tons of Guests, especially near park open and park close, can build up.

I recently hopped aboard the Disney Skyliner and noticed much longer lines than I ever have in the past, but I wanted to share some positive news with you all in case you, too, run into this and get discouraged.

In case you never had the chance to ride the Skyliner, if you are staying at either Pop Century or Art of Animation and are wishing to go to either Hollywood Studios or EPCOT, you must first take the Skyliner line to the central hub, located at Disney’s Caribbean Beach.

After breakfast, I headed over to the Skyliner hub on Hourglass Lake and noticed a decent line already building up. Though the line looked long, I only wait approximately 10 minutes. You can see how long the line was when I got on in the photos below.

Disney’s Hollywood Studios opened up at 9 a.m. and I got off the Pop Century Skyline line at around 8:40 a.m. and you can see how long the line was already at this point in the photos below.

The line was already wrapping through the parking lot and into the streets. I have been on the Skyliner line before where it went into the one side of the street near the bus station, but this wrapped around the central hub of grass three times and was back up all the way towards the other side of the street (where the Disney’s Caribbean Beach Resort hotel buildings are located).

However, I timed how long I actually waited and it is way less than you probably imagine. When I first saw this line I easily thought I would be waiting close to 40-45 minutes, but I got on the line at 8:40 a.m. and walked into my Skyliner gondola at 9:02 a.m. — So, I only waited 22 minutes!

My point is that even if you see these long Skyliner lines, don’t get discouraged. Because this mode of transportation is constantly in motion (aside from the short periodic stops for wheelchairs loading and unloading) the line consistently moves.

And, even the signs in place throughout the line are not accurate and state a longer period of waiting time than it actually ends up being. For example, when I approached the 25-minute mark sign, I was already in line for 10 minutes and I only waited a total of 22. All in all — Don’t fear if you see long Skyliner lines. They are not as long as they seem!

If you want to visit Disney World on your next family vacation and utilize the Disney Skyliner, but need help planning, don’t hesitate to reach out to our friends at Academy Travel. They will help you book your Disney Resort, Disney Park Pass Reservations, dining reservations, and even offer tips and tricks so you can soak up all the magic. Get started with a free quote today!

Have you ridden the Disney Skyliner? What is the longest you waited? Let us know in the comments below.

This article has been updated since original publication.