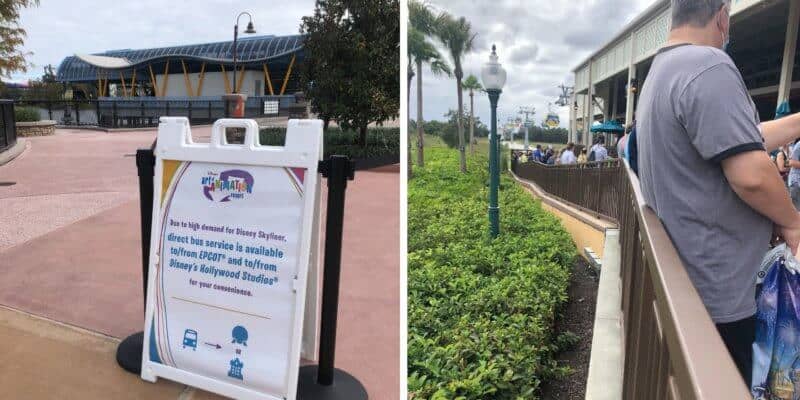 With more and more Guests coming back to stay at Disney Resort Hotels and capacity at Walt Disney World increasing to 35%, Disney Park crowds are getting larger. And with them, the lines for resort transportation.

Although the Skyliner is a huge plus for any Guest staying at a Disney Skyliner Resort, the increased capacity also means increased lines. But, we found 2 ways to avoid these lines.

For those who don’t know, the Disney Skyliner is the newest form of Disney transportation, and also the fastest. It is a gondola system that takes you from your Disney Resort to Disney’s Hollywood Studios or EPCOT.

The Disney Resorts which have connections to the Disney Skyliner’s are:

Please note that if you are staying at any resort other than Disney’s Caribbean Beach Resort, you will need to get off your Skyliner at Caribbean Beach to swap to another line which will take you to either EPCOT or Disney’s Hollywood Studios.

Recently we reported that the Skyliner lines were pretty massive at the Pop Century Resort / Art of Animation Resort Skyliner station. It seems that those lines are still holding true, but there are a couple of ways to beat them. Below is only part of the line to go to EPCOT for park opening, and that is the second line I had to wait in after coming from Disney’s Art of Animation Resort.

If you are heading to EPCOT or Disney’s Hollywood Studios in the morning, the lines at both your Disney Resort and Disney’s Caribbean Beach Resort (the Skyliner hub) are going to be super long. And just so you know, although the lines look quite large, the Skyliner is in constant motion so those long lines do move fast.

If you want to walk on, however, try going to the parks afternoon. The lines are literally gone so you don’t need to worry about waiting for anything. This may shorten your park day but if you are open to leaving a little later, this could really benefit your experience. This is what the station at Caribbean Beach looked like around then.

If you wanted to avoid the Skyliner all together, it seems that busses are back in action! Prior to the pandemic, Skyliner Resorts would only run busses once each hour to EPCOT and Hollywood Studios. Disney has no put up signage around the Resorts allowing Guests to know that more busses will be running more frequently due to the volume of these crowds.

And of course, you can also simply just wait in the Skyliner line and even if it looks long, you likely will be in constant motion and will be able to get through in a timely fashion. If you want to test out any of our tricks, why not head to Disney World today? Click here and you can begin planning your vacation!

Have you experienced long Skyliner lines?