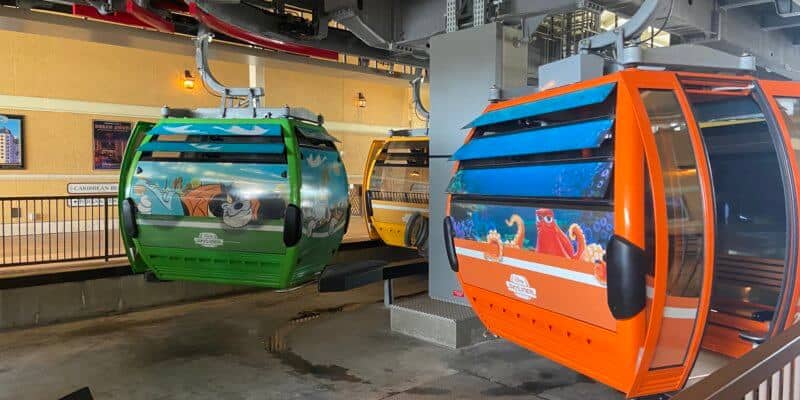 However, Guests had to find other modes of transportation the last few days as the Disney Skyliner has been undergoing scheduled maintenance on all of its lines.

On January 24, Guests staying at Disney’s Pop Century Resort and Disney’s Art of Animation Resort were not able to use the complimentary Skyliner service, and on January 26, the Disney’s Hollywood Studios Skyliner line was unavailable. Now, it is EPCOT’s turn as the International Gateway Station is currently not available today, January 28, so that Disney can perform the necessary maintenance on this Skyliner line.

Due to the maintenance, the International Gateway Station is closed and the Skyliner is not running from EPCOT to the other Skyliner Resorts. Instead, Disney is telling Guests to use the Friendship boats (which are located directly across the way from the International Gateway Skyliner station) or other Disney transportation, which can be accessed at one of the nearby Disney Resorts, in order to get to wherever their final destination is.

This Skyliner maintenance is only scheduled for today, January 28, and this Disney Skyliner station should be back up and running tomorrow, January 29. Inside the Magic will always keep you updated as we get information surrounding the Disney Skyliner or other modes of Disney transportation.

Guests can board a Disney Skyliner gondola on one of many Skyliner lines — which is a complementary mode of transportation — and glide past one-of-a-kind views of waterways, woodlands, and two Walt Disney World theme parks — Disney’s Hollywood Studios and EPCOT. The Skyliner transportation is in constant motion, which means Guests arrive at their destination within minutes of boarding a Disney Skyliner gondola! Relax along the way, take in the views, and you will be there before you know it.

For those Guests staying at Disney’s Art of Animation, Disney’s Pop Century, Disney’s Caribbean Beach, or Disney’s Riviera Resort, the Disney Skyliner is easily accessible and allows travel from their resort to two Disney theme parks — EPCOT or Disney’s Hollywood Studios — all while taking in beautiful views of Disney landscape.

Disney Parks Blog also makes mention of the possibility of slowing down or stopping during your Skyliner gondola ride:

Similar to ski lift systems, Disney Skyliner may slow or come to some stops during the ride, particularly when we need to accommodate guests who require additional time to load their cabin.  We want to assure you that the comfort of every guest is important to us.

If you want to experience the Disney Skyliner at Walt Disney World Resort for yourself, but aren’t sure where to begin planning — Don’t hesitate to reach out to our friends over at Academy Travel.