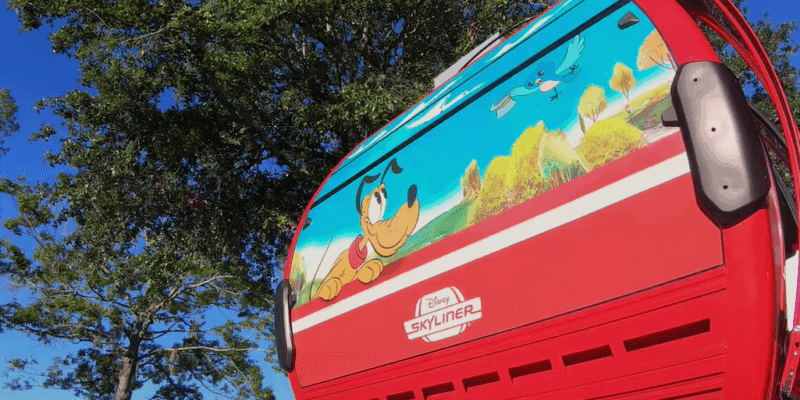 This is a developing story and we continue to update this article with the most recent information as it becomes available.

Walt Disney World Resort guests got stuck on Disney’s newest transportation system, the Disney Skyliner, after an accident occurred at one of the loading stations this evening.

After the Disney Skyliner came to a halt while transporting guests to and from the Walt Disney World Resort hotels and theme parks, guests took to Twitter to voice their concerns. An accident reportedly occurred at the Disney Skyliner station at Disney’s Riviera Resort, where numerous gondolas collided with one another. At this time, is is still unclear what caused the accident as Walt Disney World has not yet issued a public statement regarding the issue. However local news stations have reported that it is the result of a power failure.

According to the Orlando Sentinel, Walt Disney World officials stated in a press release early Sunday morning that the Disney Skyliner experienced “unexpected downtime on Saturday night. “As a result, the Skyliner will be closed while we look into the details surrounding the downtime.”

The Disney Skyliner Transportion system officially opened to the public less than one week ago. It serves to transport Walt Disney World guests to several locations throughout the resort, including four hotels (Disney’s Riviera Resort, Disney’s Caribbean Beach Resort, and Disney’s Art of Animation and Pop Century resorts) and two theme parks (Epcot and Disney’s Hollywood Studios). Each of the approximately 300 gondolas is suspended around 50-60 feet above the air and normally travels around 11 miles per hour.

This happened at one of the stations. You have the right to know pic.twitter.com/sNTYjgIC4i

the #disneyskyliner is broken, carts are crashed, alot of people are stuck its been at least an hour. #Disney #DisneyWorld pic.twitter.com/kIHk6Ypb7Y

Guests were allegedly stuck inside their Disney Skyliner gondolas for upwards of an hour and a half before Walt Disney World Resort officials came to the rescue. The Reedy Creek Fire Department began evacuating guests between 9:30 and 10 p.m. on Saturday using a truck and ladder. In the meantime, some guests were told to open the emergency kits located inside the gondola cabins, which reportedly include items like water bottles and wet wipes.

Truck and ladder being prepped to evacuate from Skyliner at Boardwalk Resort #disneyskyliner #DisneyWorld @WDWToday pic.twitter.com/4WAu5ClwMq

People I’ve spoken with who are currently trapped say they have found emergency kits inside the gondolas that contain a few water bottles, cleansing wipes and bags. #disneyskyliner

Disney guests stuck on the Disney Skyliner continued to share photos and videos to social media, documenting the evacuation process.

As of almost 11 p.m. on Saturday night, evacuations were still reportedly underway.

After nearly three hours of the Disney Skyliner at a halt, it had reportedly begun moving again. Walt Disney World Cast Members were prepared to help as guests were eventually able to exit their gondolas.

We are now slowly moving back to the station at Boardwalk 3 hours into being stuck on Disney Skyliner. #disneyskyliner #disneyworld @WDWToday pic.twitter.com/bSGW16m3Ju

This is a developing story and we will update this article as more information becomes available.