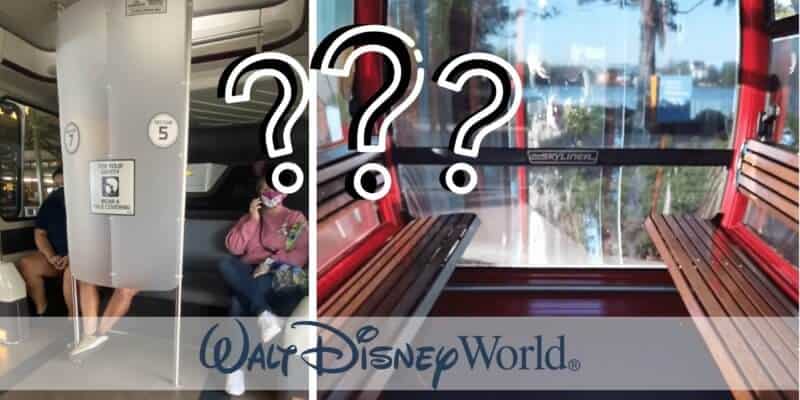 Walt Disney World is continuing to adapt and move forward with the phased reopening of its theme parks and Resort hotels. In fact, not only has Disney World increased capacity and begun boarding multiple parties per ride vehicle and roller coaster — and they even installed plexiglass on certain attractions — but just a few days ago, they also installed plastic dividers onto certain monorail cars, allowing them to board up to four parties per car.

As you can see in the photo above, Disney World has installed new plastic dividers (not actual plexiglass, like in other locations around the Resort) within the monorail cars to allow up to four parties to board at once. When Disney World first reopened the theme parks in mid-July, typically only one party of Guests loaded per monorail car. This new development is likely to help decrease wait times as well as allow them to increase capacity again if they wanted to do so in the future.

So with all of this being said, could Disney World continue adding plastic dividers and plexiglass to other locations, such as the Disney Skyliner?

If you aren’t familiar, Guests can board Disney’s Skyliner — a complementary mode of transportation — and glide past one-of-a-kind views of waterways, woodlands, and two Walt Disney World theme parks — Disney’s Hollywood Studios and EPCOT. The new Skyliner transposition is in constant motion, which means Guests arrive at their destination within minutes! Relax along the way, take in the views, and you will be there before you know it.

With the Skyliner being not much smaller in size than a monorail car, personally, I can see Disney doing this. With the monorail, Disney can now fit four two-Guest parties in a car — With two Guests per section, four sections per car. With the Skyliner, we can see them doing something very similar. The added bonus for having dividers on the Disney Skyliner is the fact that there are small windows at the top of each Gondola, allowing for fresh air ventilation throughout the ride, unlike the monorail which is a fully enclosed space.

Additionally, the Skyliner lines at Disney’s Caribbean Beach Resort, which serves as the central hub for both the Disney’s Hollywood Studios line and the EPCOT line, as well as for Disney’s Pop Century Resort, Disney’s Art of Animation Resort, and Disney’s Riviera Resort, are continuously getting longer. If Disney World wanted to increase capacity at both the Resorts and the theme parks, adding plexiglass to the Skyliner could be beneficial for both wait times and for capacity.

At this time, Disney has not yet made any sort of announcement regarding plexiglass or dividers being implemented into the gondolas, but Inside the Magic will continue to update you as we get information.

Do you want to see Disney add plexiglass to the Skyliner gondolas to help decrease wait times or do you enjoy having your own personal Skyliner ride? Let us know in the comments below.