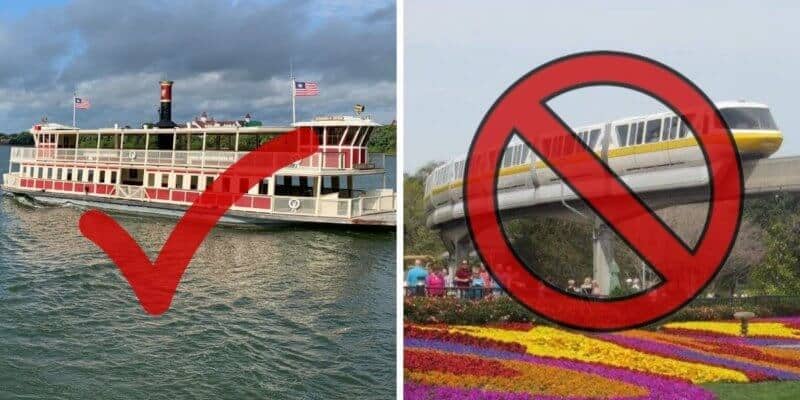 Walt Disney World is continuing to adapt and move forward with the phased reopening of the theme parks and resorts. Since reopening mid-July, the Disney World parks have already increased capacity and began boarding multiple parties per ride vehicle and roller coaster — and they even installed plexiglass on certain attractions. And just recently, the Disney World Resort has taken the next step in moving forward as they have installed plastic dividers onto certain monorail cars, allowing them to board up to four parties per car.

I was there on-site and was one of the first groups to experience the new loading system as it is being introduced this week. After doing so, I personally feel it is time to start taking advantage of the Disney World boats and wave goodbye to the monorail (at least for now).

As you can see in the photo above, Disney World has installed new plastic dividers (not plexiglass, like in certain locations) within the monorail cars to allow up to four parties to board at once. When Disney first reopened the theme parks in July, it was common for there to only be one party of Guests per monorail car. This new development is likely to help decrease wait times as well as allow them to increase capacity again if they wanted to do so.

Personally, I have visited Walt Disney World three times since they reopened, and I have to say, this is the first time I am a bit disappointed in how Disney is running things. I understand wanting to board multiple parties per car and therefore installed these plastic dividers, but this just did not feel safe to me.

Disney World has already installed dividers onto buses as well as onto different ride vehicles and these are examples of seeing multiple parties within the same enclosed space; however, this is where I see a difference.

On Disney World buses, they are still leaving enough space between Guests even with the dividers in place, as you can see below. But with the monorail cars, I believe there is not enough space — it appeared to me that Guests can easily come in close contact with one another — and their legs can even touch — when seated next to each other with only a plastic divider to separate them.

Additionally, with the monorails being Guests “highway in the sky,” what would happen if the monorail train breaks down? The CDC’s Public Health Guidelines for Community Exposure state that an “individual who has had close contact (within 6 feet for a total of 15 minutes or more)” can be at risk for COVID-19 exposure, if the individual they are in contact with has or was exposed to the virus. If a ride vehicle breaks down within an attraction or a Disney World bus breaks down, the Cast Members would likely be able to get Guests off of these vehicles within a reasonable and short amount of time, but what if a monorail breaks down? Though this happens infrequently, there is a chance that, if a monorail does break down, Guests could be stuck on the “highway in the sky” for longer amounts of time as it is not as easy to evacuate a monorail car compared to a Disney World bus.

After not only experiencing the new monorail loading system but also considering my experiences on other modes of Disney transportation and my feelings of safety during this time, I feel as though it is time to shift our focus to the Disney World boat system.

Soon after taking the monorail, I decided to hop on the ferry boat and the comparison really is black and white. The ferry boat was nearly empty (now, I understand that in busier times there will be many more Guests onboard, however, looking at the social distancing markers, it really doesn’t matter how empty the boat was at the time).

The ferry boat also is an open space, with constant air moving through (unlike an enclosed monorail car). This allows for fresh air to move throughout, meaning Guests would not be breathing one another’s air or within close contact of one another since social distancing keeps all Guests several feet apart.

Just like the monorail system, Disney World also has boats going to and from the Magic Kingdom Park and its surrounding Disney Resort hotels. The ferry boat goes from the Ticket and Transporation System to Magic Kingdom while other boats go to and from Magic Kingdom and the nearby hotels — Disney’s Grand Floridian Resort and Spa, Disney’s Wilderness Lodge, Disney’s Fort Wilderness Campground, and Disney’s Polynesian Resort. If you are looking to get to Disney’s Contemporary Resort, there is a short walkway that should only take Guests about 10-15 minutes to walk. A walkway also just opened at the Grand Floridian.

Overall, I think that it is time for Guests to start utilizing the boat transportation system to and from Magic Kingdom, especially during this unprecedented time amid the ongoing pandemic. As always, if you are visiting any public place, whether it be a theme park or somewhere else, please stay safe and follow the CDC Guidelines, such as keeping a safe social distance from one another, wearing a proper face covering, washing your hands often, and covering your mouth and nose when sneezing or coughing.

For the latest information on Disney World health and safety regulations, as well as current operations during the pandemic, click here.

Comments Off on OpEd: Take the Disney World Boats (Not the Monorail) For Now