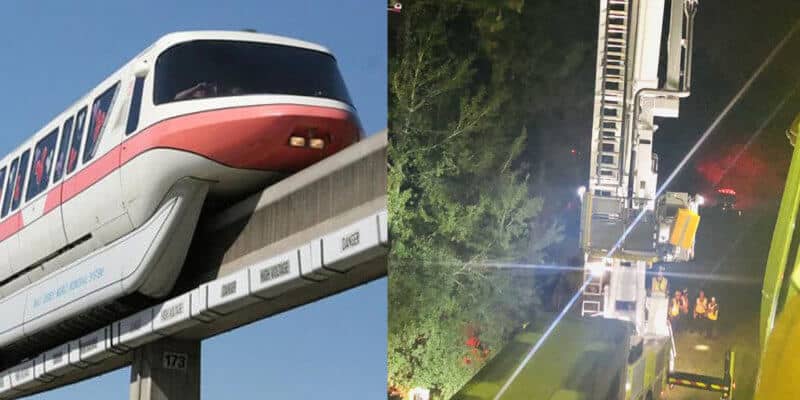 Late last night, Walt Disney World guests had to be rescued from a broken-down monorail after the iconic train that takes guests around the resort “…just kind of died,” according to guests.

Guests were traveling along the Epcot monorail, which takes park guests from the Transportation and Ticket center to the theme park when the train lost power on the tracks. The train first lost power around 10:30 P.M. last night and guests traveling in the train were not rescued until closer to 1:30 a.m.

In order to take guests off of the train, they had to exit with the guidance of rescue crews through the monorail’s roof. To get guests back on the ground, rescue crews utilized buckets, which were able to remove only two passengers at a time from the suspended train.

According to Click Orlando, around 2:00 a.m. crews who responded to the scene were able to get the train moving again. No guests were injured on account of the incident. At this time, the exact number of guests who had to be rescued from the train is unknown. A report by Click Orlando says “dozens of people.”

While guests were waiting to be rescued from the train, some took images of the rescue crews–some of which they posted to their social media accounts. In the Tweet below, we see a concerned park guest sharing her own perspective of the break down, saying “Something happening to the monorail right now! Smell in the air like electrical and brakes.”

? Something happening to the monorail right now! Just leaving the Contemporary before the TTC. Smell in the air like electrical and brakes. Monorail broken down. Rescue. Fire. Ambulance. @disunplugged @intercot #tourwithsteph #disneymonorail #disneynow #disneynews #disneylive pic.twitter.com/v0o8YZkOuy

In the video, you can briefly see the rescue crews at the scene of the incident attempting to rescue the guests trapped on the monorail.