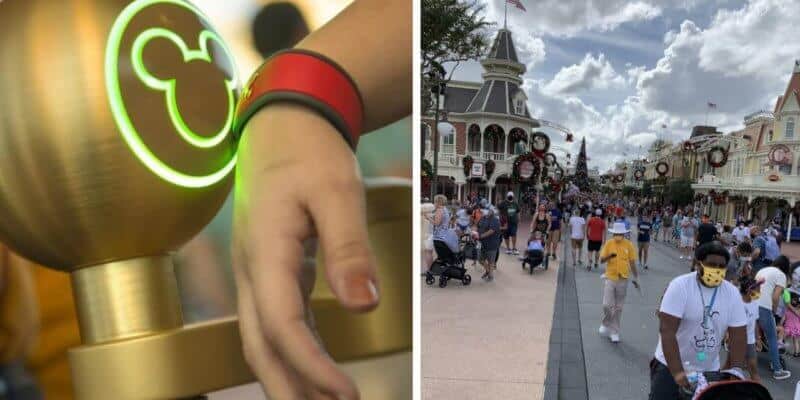 Recently, Disney World has made many changes to their daily operations to adapt their parks to the new normal and keep Guests safe while the world is battling the ongoing pandemic. One of those changes has been a dramatic reduction in capacity.

Since the parks reopened in July, some offerings such as Park Hopping have been reinstated after they were suspended. However, with the return of this perk, many Guests such as myself have wondered if Disney had to increase their capacity to make it happen.

Governor DeSantis has given Florida theme parks the green light to operate as they see fit, so long as their operations continue to fall under the rules set out by the state. This means that Disney World can raise its capacity at any given time — although Walt Disney World Resort has stated that they continue to make decisions based on the guidance of health officials and CDC recommendations. In the past, we reported that Disney has indeed raised capacity since the parks reopened in mid-July — though they did so silently and only announced it after capacity had been raised for an undisclosed amount of time.

Therefore, the possibility of this happening again is quite plausible. With Park Hopping returning, Guests are now able to go from park to park as much as they want after 2 p.m., so long as they begin with the park that they have a Disney Park Pass reservation for that day. Considering the Disney theme parks — especially Disney’s Hollywood Studios — hit capacity in terms of Disney Park Passes very often, it was interesting to see occasionally that although Disney’s Availability Calendar may show a park is full for reservations, the capacity hotline would, at the same time, announce that all parks were open for park hopping.

Hearing this, it is easy to assume that Disney may have raised their capacity to allow for more Guests to Park Hop. Well, actually — they didn’t.

Orlando Sentinel reporter Gabrielle Russon (@GabrielleRusson) announced via Twitter today that Disney has confirmed capacity is still being held at the previously announced 35%.

One little nugget. I’ve seen chatter after a few busy days in early January, did #WaltDisneyWorld quietly sneak up its capacity as it brought back park hopping? Disney told me no. It’s still same 35% capacity that was announced at last earnings call in November. @orlandosentinel

One little nugget. I've seen chatter after a few busy days in early January, did #WaltDisneyWorld quietly sneak up its capacity as it brought back park hopping? Disney told me no. It's still same 35% capacity that was announced at last earnings call in November. @orlandosentinel

That being said, some may still wonder how Guests are still able to Park Hop into a theme park that has no more Disney Park Passes available to it — and I think we may have a possible explanation.

Universal Orlando Resort utilizes a first-come-first-serve method where visitors can enter their parks until capacity is reached. Once Universal Studios and Universal’s Islands of Adventure are at capacity, Guests can line up and wait for others to leave so that they can enter. This method of rotating Guests allows for Universal to theoretically “expand” its capacity in terms of the variety of foot traffic in the park each day, while never going over at any given time.

Disney has seemingly taken a page from the Universal handbook as Park Hopping is allowing for Guests to rotate their spot in the park as they leave to allow new Guests to enter. Before Park Hopping’s return, Disney would cap their Disney Park Pass reservations at 35%, and if half of the original Guests left the park by 3:00 p.m., no new Guests would be allowed entry (unless they had a Disney Park Pass reservation). Therefore, the number of Guests actually inside the theme park could typically decrease as the day went on.

Now that Disney is tracking how many Guests are leaving and entering the parks, they can consistently keep the park at their 35% capacity if the demand is there after 2:00 p.m. with Park Hopping now available. Financially, this is great for Disney, as this means that new Guests are constantly entering the parks as old ones leave, which means new opportunities to sell food and merchandise!

Another possible theory as to how Disney can continue letting Guests in even though Disney Park Passes are all gone could be that once Park Hopping began, Disney reduced the amount of Disney Park Passes available to budget for the influx of Guest parks would experience in the afternoon. This has never been said by Disney; however, it would guarantee Guests the ability to Park Hop.

Stay tuned to Inside the Magic as we continue to monitor Disney World’s capacity.

Have you noticed an influx of Guests since Park Hopping returned in January? Are you glad Park Hopping is back?

If you want to start planning Disney Park Pass reservations to head over to Magic Kingdom and ride Seven Dwarfs Mine Train, or visit the International Festival of the Arts at EPCOT, you can start booking the magic today! Click here to get started.