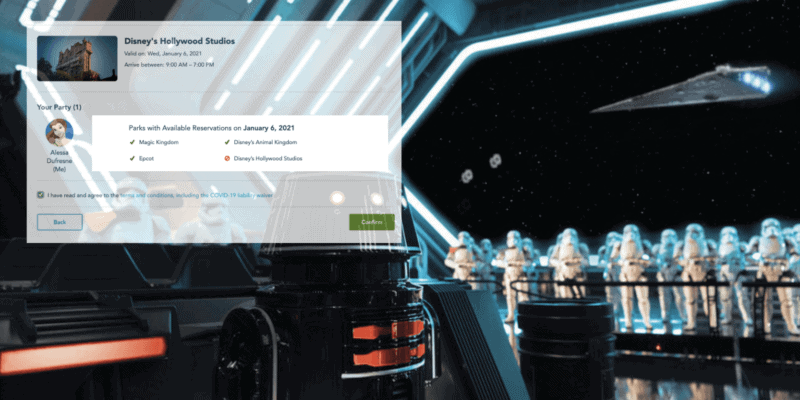 If we take a look at the Disney Theme Park Reservation Availability calendar, we can see that for today, Disney’s Hollywood Studios no longer has Park Passes. As we can see below, Hollywood Studios has the red symbol, while Magic Kingdom, EPCOT, and Animal Kingdom do not. This is not only the case for Annual Passholders but also Disney Resort Guests and ticket holders.

However, when going to make a Disney Park Pass reservation for the seemingly full Hollywood Studios, I was able to do so (a few times over).

Currently, it is unclear as to why the calendar shows Hollywood Studios not having Park Passes available, despite being able to make a Disney Park Pass. Considering the frequent glitches Guests undergo on the My Disney Experience app, I wouldn’t be too surprised if there was a possible glitch on the availability calendar showing a capacity filled park, all the while it is not at capacity.

Another possible explanation for this could be Park Hopping. With Park Hopping being newly re-introduced to the Disney Parks, Park Pass and capacity rules could have changed.

As of today, the parks are still going to have a 35% capacity limit, but the Guests are able to rotate which parks they visit. So when one Guest leaves after 2:00 pm, another may enter in their place. This means that all Walt Disney World parks must now keep tabs on how many Guests are leaving in order to know how many more are able to be let in.

With that being the case, if Hollywood Studios has yet to hit capacity in terms of actual Guests entering the park, perhaps Disney re-opened the Disney Park Pass system. This has not been confirmed or mentioned by Disney and is purely speculation at this point, but it does fit the current first-come-first-serve model that Park Hopping during a pandemic calls for.

If there is one major key thing that Guests can pull from this, it’s to always try to make a Disney Park Pass reservation even if the availability calendar says otherwise. Guests constantly are changing their plans and having to cancel existing reservations — which then opens up the availability to other Guests who are constantly refreshing the app to score a Hollywood Studios reservation so that they can try their hand at a Rise of the Resistance Boarding Pass in Star Wars: Galaxy’s Edge. Or, sometimes, there may just be a large amount of Disney Park Passes available, like today when the availability calendar says otherwise.

If you want to start planning Disney Park Pass reservations to head over to Magic Kingdom and ride Seven Dwarfs Mine Train, or visit the International Festival of the Arts at EPCOT, you can start booking the magic today! Click here to get started.

Have you ever made a last-minute Disney Park Pass reservation? Has your reservation gone through before, even if the calendar showed the Disney park of your choosing was at capacity?