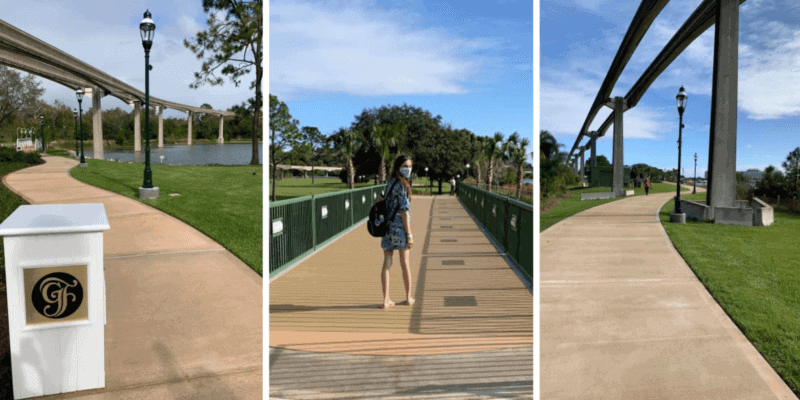 One of the benefits of staying at the Disney Resort hotels in the Magic Kingdom area is the close proximity to Disney World’s first theme park. In fact, one of the main reasons why so many Guests love staying at Disney’s Contemporary Resort, for example, is that there is a walkway from the Contemporary to Magic Kingdom. Now, another walkway connecting a Disney Resort hotel to a theme park has opened, and it’s easier than ever to meander around the Most Magical Place on Earth.

As of this morning, the walkway connecting Magic Kingdom to Disney’s Grand Floridian Resort & Spa has officially opened. Our reporter Rebekah Barton was on the scene today to check out the walking path for herself. Take a look at some photos from her experience:

This pathway has been a long time coming. Back in 2019, it was first announced that Disney’s Grand Floridian Resort & Spa would be getting its own walkway to Magic Kingdom Park. In our initial announcement of this project, we shared information from the construction permit, as well as some context about other Disney Resort hotels that are located within walking distance to parks (such as resorts within the EPCOT and Disney’s Hollywood Studios area).

Since this announcement, over the past year and a half, work has continued on the walkway from the Grand to MK. Now that the walkway is complete, Guests can finally use it, making a stay at the Grand Floridian even more desirable than before. Plus, in this pandemic era, with many Guests wanting to avoid being around others whenever they can, walking in the fresh air from your resort to a theme park and back again sounds even better!

Want to book a Disney World trip? Click here to work with the Authorized Disney Vacation Planners at Academy Travel. They are experts in all things Disney and can help plan the most magical vacation for you.