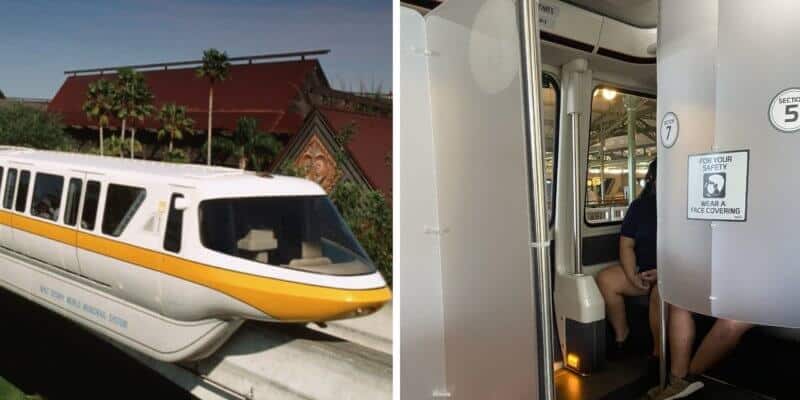 If you have visited Disney World since its reopening in July, you likely have noticed several changes as the theme parks have had to adapt to the pandemic. One of the major changes has been socially distancing measures, including Guests getting their own monorail section when headed to Magic Kingdom or any of the Magic Kingdom Resorts to ensure multiple parties were not crowded together. It seems now, that has changed.

Senior Editor Kelly Coffey was on the scene today when she noticed that the monorails had brand new dividers up to fit more Guests inside a single monorail car.

Although the dividers between each monorail section are still there, there are now sections within that section. If all this section talk is confusing you, just talk a look at the below photos to see what we mean!

As you can see, the dividers are labeled for sections 5-8, meaning the monorails now can hold up to 4 separate groups of Guests while they run instead of just one single party.

Disney World has recently begun fully loading certain ride vehicles that once would space out Guests such as Slinky Dog Dash at Disney’s Hollywood Studios, and Big Thunder Mountain at Magic Kingdom. These changes began after it was announced that the CDC’s Public Health Guidelines for Community Exposure defines a person who could have possibly been exposed to COVID-19 as an “individual who has had close contact (within 6 feet for a total of 15 minutes or more)” with another person who has also been exposed to (or has contracted) the virus.

Our Inside the Magic Senior Editor Kelly rode two direct monorails today, the blue one and black one, and noted that although the black monorail did have the dividers up, the blue did not. Considering this is the first time we are seeing these dividers in place it is likely that Disney is just beginning to roll them out. It will be interesting to see if the dividers do indeed make it onto the resort monorails as well.

Stay tuned to Inside the Magic as we continue to report all changes as they come to the Disney World parks and beyond!

Do you think that Disney is going to start loading multiple parties of Guests in each monorail section? Would you feel comfortable riding with another party? Let us know your thoughts!