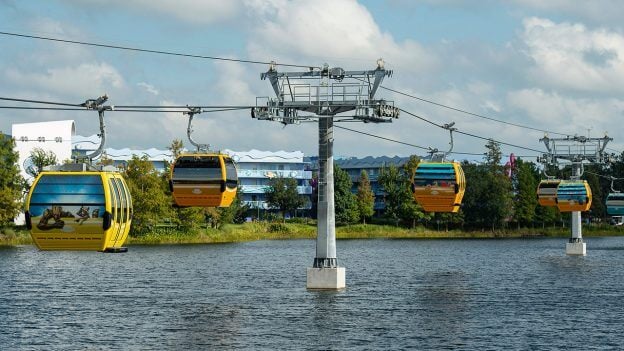 Disney’s Skyliner is a popular mode of transportation at Walt Disney World Resort it can bring Guests to EPCOT and Disney’s Hollywood Studios in minutes from select resorts, and since it is constantly moving, lines tend to move quickly as well.

At times, the delay could just be because Cast Members need to stop the system to load Guests who may be using an ECV or wheelchair, or they are unable to quickly hop aboard, and those delays only last a few moments. But, there have also been situations in which the Disney Skyliner has been stuck for an hour or more in the air while Guests were riding due to unforeseen circumstances (like inclement weather or other difficulties) that have led to disruptions during transportation.

Today, it seems that the Skyliner is experiencing some complications, though the reason for the pause in operations has not been announced.

Theme park fan and reporter Drew (@DrewDisneyDude) took to Twitter to share his experience and warn Guests about the Disney Skyliner undergoing a few issues.

EPCOT/Caribbean Beach Skyliner line is having tons of issues at the moment. If you’re in the area take a different method of transportation. No estimate on when it will be back up. #WaltDisneyWorld #DisneyWorld

He then added to the Tweet with an update:

Disney Skyliner line for EPCOT/Riviera/Caribbean Beach is going to be down for a while. Cast Members aren’t allowing guests to board and current goal is to get everyone off safely. #WaltDisneyWorld #DisneyWorld

Disney Skyliner line for EPCOT/Riviera/Caribbean Beach is going to be down for a while. Cast Members aren't allowing guests to board and current goal is to get everyone off safely. #WaltDisneyWorld #DisneyWorld https://t.co/WnImRMsgD2

Drew noted that Cast Members were working to get everyone off the Skyliner safely, and in a reply to another Twitter user, he shared that he was thankfully not one of the Guests stuck in the air.

I’m so lucky I’m not stuck in the air.

I'm so lucky I'm not stuck in the air.

Though the Skyliner did experience an unexpected pause in operations earlier today, it appears that it is now up and running again. Note that Disney will always work to ensure all Guests get to safety when the Disney Skyliner operations are paused from time to time. We will update this article as more information regarding this situation with the Disney Skyliner comes to light.

The following Disney Resort hotels are on the Disney Skyliner transportation line:

Please note that if you are staying at these resorts, the Skyliner is not the only method of transportation. If you are afraid of heights or do not want to ride for any reason, busses are always available, though be sure to plan accordingly as the bus schedule can vary depending on the theme park you are attempting to get to.

Stay tuned to Inside the Magic as we continue to update you on this ongoing situation.

What is your experience with the Disney Skyliner? Let us know in the comments.