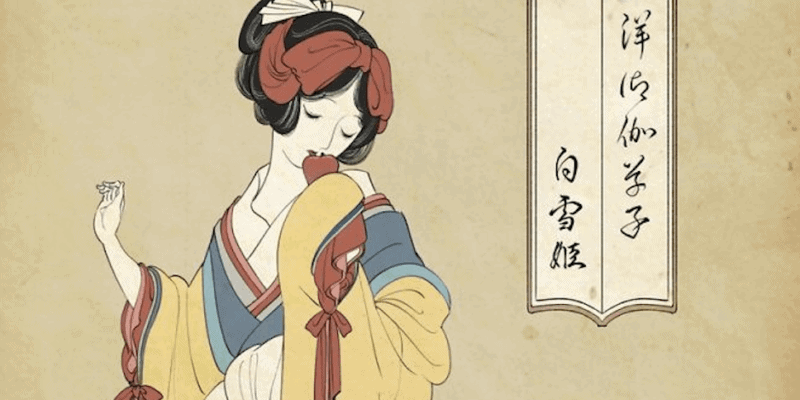 We’ve seen lots of amazing Disney princess reimaginings lately, from alternate happily ever afters, to superheroes, to watching them play out their lives on Instagram. But now, one artist has taken it to the next level and produced a collection of stunning pieces in the traditional Japanese style of ukiyo-e.

We’re sure that you’ll at least recognize the art style from various depictions of traditional Japanese iconography and we’re also sure you’ll agree that artist Ono Tako has done a sensational job in representing some of our favorite Disney icons. He told Bored Panda that he decided to create a range of ‘western fairytales’ by combining the style of legendary painter Kitagawa Utamaro with the original designs of each iconic Disney Princess.

To us fans, each Disney princess represents something brilliant about the Walt Disney Company. These amazing animated women inspire us with their tales of magic, kindness, and coming of age. Fans know exactly what classic ideas and concepts they want to see from each of their favorite Disney Princess, and fortunately, Tako captures all three of their essences perfectly. His art makes it clear why these magic women make Disney the happiest place on earth.

The detail on Tako’s work is absolutely astounding and this print of brave Ariel is certainly no exception. Everybody’s favorite little mermaid looks stunningly regal and the pastel color palette is just phenomenal. We particularly like that Sebastian and Flounder also get a nod.

I don’t claim to be an art critic, but I know what I like, and these designs are just fabulous. Cinderella trying on a traditional Japanese geta instead of a glass slipper is a really great touch and works with her royal vibe. The dress is stunning too, and it’s just incredible to see a Disney princess transported into the aesthetic of another culture so seamlessly. Bravo.

No, I won’t let it go. I love this art and it’s simply opening doors for me. For the first time in forever, I can really see a piece of Disney art that speaks to me. In summer, I could totally imagine putting this up on a wall. Sure, it’d make the rest of my house look like a bit of a fixer-upper, but there you go. Well, what can Mr. Tako say except, you’re welcome. Darn it, wrong movie.

Ok, so basically I LOVE HIM. Seriously, I’m not kidding, if these incredible Disney Princess (and Olaf) prints are available to buy, I’m there. Take my money. Please. I mean just look at his little face. He looks so sad. There’s one thing that’s certainly melting and it’s my heart.

What do you think of Ono Tako’s paintings of Disney Princesses? From Princess / General Leia from Star Wars, to Sleeping Beauty, to Rapunzel from Tangled, to Merida from Brave, which Disney princess would you like to see him tackle next? Let us know in the comments below.