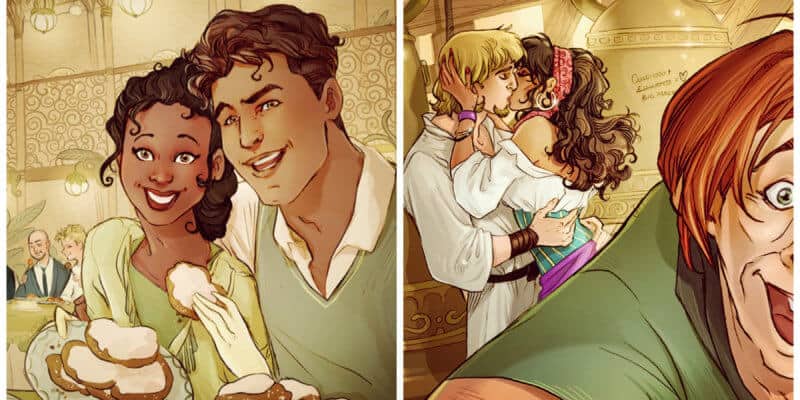 Did you ever wonder what your favorite Disney characters would do if they had an Instagram account? Well, artist, Simona Bonafini did, which is why she drew these magical illustrations, imagining how our favorite characters would present themselves on the ‘other’ happiest place on earth; the Disney Instagram-sphere.

What if Belle ran a book review blog using Insta stories? What if Hercules could take a gym selfie and go viral? And what if Merida had access to filters, captions, and fans? Each one is a Disney character that oozes just that: character. These gorgeous posts will meet the heart of all Disney fans, as they capture at least one fan’s favorite Disney character on social media, complete with witty captions!

You can find a link to Simona’s full collection here, but here are a few of our personal favorite Disney characters on social media;

Belle – Beauty and the Beast

Err, I’m not sure that book is gonna sit well with you, Belle. If there’s one series that’s the antithesis of everything Disney stands for, it’s A Song of Ice and Fire! LOVE that comment from Gaston though. That one had me cracking up.

Oh. My. Gosh. Is this not the cutest post you’ve ever seen? After all the rubbish that this adorable Ohana has to go through, it’s so beautiful to see them just hanging out and looking so happy. The camera loves them and so do their followers. Except Mertle. Mind you, Stitch should mind those manners…

One of the most fabulous Disney Princesses and now Disney Instagram star recreates that classic Instagram post that every social media queen has to try. She’s clearly heard the wolf cry to the blue corn moon. I also love @WillowGranma’s comment that she reminds her of her when she was a young twig. This artist clearly isn’t lacking character or a sharp wit!

Quasimodo posts here, representing all them bros in the friend-zone in this heart-breaking picture. He’s happy for them, ok? At least, that’s what he tells us. I also love that the most evil character in Disney history calls himself @FrolloRulez. With a z. This is amaZing.

Alright, this one’s just genius. Not only do we get an amazing ‘new hair, new me’ pic from Rapunzel (complete with a comment from a scathing parent), but just look at the background; Edward Scissorhands himself gave her the chop. Now there is a character crossover that is just waiting to happen. I’d follow the stories of this hair transformation.

Related: Disney Fans Predictions On Who Should Play Rapunzel In Upcoming Live-Action

What was your favorite picture from Simona’s collection? Which Disney character would you like to see on Instagram and how would they act? Let us know in the comments below.