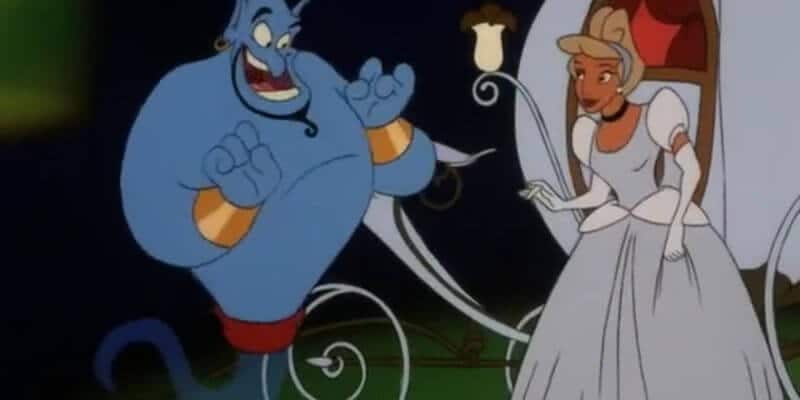 The exciting announcement that a second live-action Aladdin movie is on its way raised more than a few eyebrows, and it’s not hard to see why. Much like the animated original movie, Guy Ritchie’s whole new world (of CGI) wrapped up pretty definitively. (Spoilers for Aladdin to follow.)

There are many questions. Will Ritchie return and how close to the tone of the original will the sequel stick? Will it even be a musical? The biggest question, however, is with Genie in his freshest prince form as a humble human, what would the blue behemoth (a big reason for the success of the first film) offer the sequel?

It seems unlikely that Aladdin 2 would ignore Smith altogether, but will the mouse undo his happily ever after by turning him big and blue again? We’re going to assume that he’ll at least be back, likely with some powers, and possibly as the fully restored blue Genie fans know and love.

But where will Aladdin 2 take our main characters? We’ve looked back at the two direct to video animated sequels and the (awesome and underrated) animated series of the same name to weigh up how much of an influence they could potentially have on Aladdin 2.

Whatever direction it takes, I hope we can all agree that it should be a musical. It’d be super weird to make a non-musical sequel to a musical, right? We need new Alan Menken show tunes darn it! A whole even-newer world, perhaps? Let’s go on a magic carpet ride and discuss what the live-action Aladdin remake–sequel could look like.

3. The Return of Jafar

A no brainer, right? It’s a pretty dull premise, but bringing back the first film’s big bad is the easiest and laziest way to form an easy sequel narrative, without the need to set up a new evil character. This definitely isn’t our favorite pick for the direction of the Aladdin sequel, but it certainly wouldn’t be out of the question to see a film that draws heavily on the first direct to video sequel for inspiration. It probably wouldn’t have Iago’s big redemption arc though.

2. The King of Thieves

Now this one is far more exciting. As the writers of Aladdin 2 are said to be using the folklore story that inspired the original animated movie, One Thousand and One Nights for inspiration, the incorporation of elements from this gem isn’t out of the realms of possibility. Exploring a new facet of Agrabah (a surprisingly dark and cool one at that), King of Thieves takes the spotlight off of Iago and the Genie and puts it back where it belongs: on the titular character. With the right casting, Aladdin’s father Cassim could bring a needed gravitas to the series, and this could be one movie adaptation that might really work.

The really quite epic small screen adventures of Aladdin remain some of the most nostalgic and exciting episodes of Disney television that the 90s had to offer. Villains like the evil sorcerer Mozenrath could really breathe new life into a new franchise, offering a new antagonist that most mainstream audiences won’t be familiar with. Yes, he’s a sorcerer like Jafar, but the original story draft of King of Thieves had him as the big bad and also revealed him to be Aladdin’s brother, making him far more interesting. Why not revive that idea? Just maybe avoid that Hercules crossover. I’m not sure we’re ready for that much sass in live-action.
Related: Calling all 90s babies: “Aladdin” and “The Lion King” coming to Switch, PS4, Xbox One

Putting the focus on Aladdin himself seems like the best way to go for Aladdin 2, and a live-action movie adaptation (note: not a remake), however loose, of The King of Thieves, with elements of the animated television series like the inclusion of Mozenrath, would be our preference. With strong narratives like these, you could keep Genie in his human form (though still as a core character), maintaining the ending of the live-action remake while crafting an awesome musical adventure that raises the stakes and broadens the world. You could even go in an even more serious direction with some human conflict between Aladdin, his evil brother, and his misguided father. Make it happen, Disney…

P.S Rami Malek for Mozenrath. I can see it now.
We hope you enjoyed this nostalgic magic carpet ride into the world of the Aladdin animated television series and movies in the cave of speculative wonders. Let us know in the comments below what you’d like to see Aladdin 2 adapt, or whether you’d like to see something completely new.