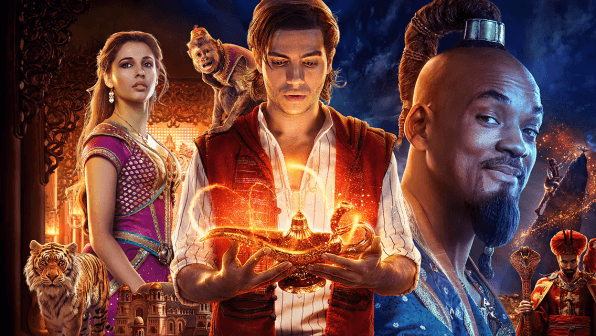 Yes, Disniacs, get ready for some more Arabian Nights! According to Variety, a sequel to Walt Disney Studios’ Live-Action remake of its animated classic, Aladdin, appears to be getting underway and it will differ greatly from the animated sequels Return of Jafar and King of Thieves.

This is a developing story and there is no confirmation yet on whether or not Guy Ritchie will return to direct or how much of the original cast will also return. But the script is said to already be tasked out to writers John Gatis(Real Steel) and Andrea Berloff (Straight Outta Compton). Producer Dan Lin appears extremely optimistic that he can capture a genie in a lamp twice.

“We have now [explored the idea for a sequel]. We certainly when we first made the movie wanted to just make the best movie we could and let audiences tell us if they wanted to see more. And I would say resoundingly audiences want to see more. They’ve watched this movie multiple times. We have lots of fan letters about people who really go back and they bring their friends and bring their family. And so we feel like there’s more story to tell. We are going to treat it the same way we treat the original Aladdin movie and not going to do a shot by shot remake of anything that’s been done before. We’re really looking at what’s been done before in the past and the home video, and there’s just more story to tell with the underlying materials. So without giving away too much, we are certainly exploring where we can go with this franchise.”

Related: Will Smith responds to ‘Aladdin’ co-star after stating he’s had no auditions since film debuted

Nobody should be surprised Disney is at least considering a sequel to their Aladdin remake. The visually spectacular film was one of Disney’s seven last year to gross more than $1 billion at the box office and it is one of the more accepted of all the previous live-action remake attempts. Plus, after Return of Jafar, how bad can it be? This isn’t even the first news of a continuation of stories from Agrabah. Disney already announce plans for a Prince Anders spinoff on Disney+. You can read about that by clicking the link below:

Related: ‘Aladdin”s Prince Anders reportedly getting his own Disney+ spinoff

But this is a continuing story and Inside the Magic will update you on the events as they unfold.

What do you think about a live-action Aladdin sequel? Did you like the live-action remake? Let us know in the comments!