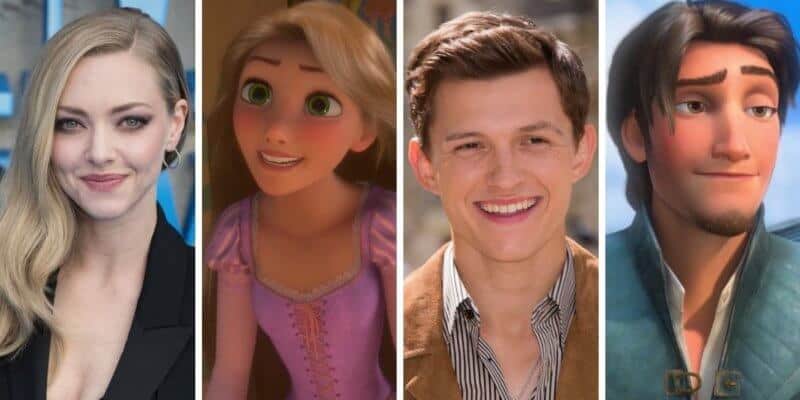 This past Valentine’s Day, the news broke that Disney is reportedly working on a new Rapunzel live action film. We are still unsure if the upcoming live action movie will follow the storyline of the animated film, Tangled, or if this movie will be its own live action version of Rapunzel’s fairy tale story.

But that hasn’t stopped Disney fans from all over already casting who they think would make the perfect Disney Princess — Rapunzel — and dashing Flynn Rider in the upcoming live action Rapunzel film.

Let’s take a look at what some of the Rapunzel and Flynn Rider possibilities could be, thanks to Disney fans everywhere (Someone even gave their opinion on who they’d like to see cast as Mother Gothel).

Florence Pugh as Rapunzel and Tom Holland as Flynn Rider

florence pugh as rapunzel and tom holland as flynn rider in the tangled live action please and thank you pic.twitter.com/Pb9DggOOwK

Florence Pugh as Rapunzel and Jacob Elordi as Flynn Rider

If @DoveCameron isn’t live action Rapunzel then I’m not watching it pic.twitter.com/fx9XvVrI4h

amanda as rapunzel is the only way i'll allow a tangled live action, no i dont care shes too old for the role im not taking criticism on this https://t.co/lYSRW3D1Zz

Manifesting this for the live action Rapunzel ? pic.twitter.com/VKcfaD33NN

Mandy Moore as Rapunzel and Zachary Levi as Flynn/Eugene

I say this way too often but seriously I need a Tangled live action remake and in all honestly
Cast @TheMandyMoore and @ZacharyLevi as Rapunzel and Eugene please. #Tangled #tangledliveactionmovie pic.twitter.com/LjXlMpRuDi

And this Disney fan even chimed in on who they would like to see play Mother Gothel. This Twitter user is rooting for the one and only Idina Menzel to play the villain. (From Elsa to Mother Gothel, it could work).

The upcoming live-action Rapunzel film is expected to have screenwriter Ashleigh Powell to write the script, who you may know from her work on writing the screenplay for The Nutcracker and the Four Realms.

Some of the others included rumored to be on production include Michael De Luca (Captain Phillips) and Kristin Burr (Christopher Robin). Zoe Kent (Lilo and Stitch remake) is currently being looked at to executive produce the project. Jessica Virtue (Mulan remake) and Lucy Kitada are being rumored to oversee the live-action Rapunzel film.

If this rumor does turn out to be true, the upcoming live-action remake film based on Rapunzel will join other Disney live-action remakes, including Jon Favreau’s The Lion King and The Jungle Book, as well as Dumbo, Aladdin, Pete’s Dragon, Mary Poppins Returns, and more.

Who do you want to see play Rapunzel in the upcoming live-action film? Let us know in the comments.