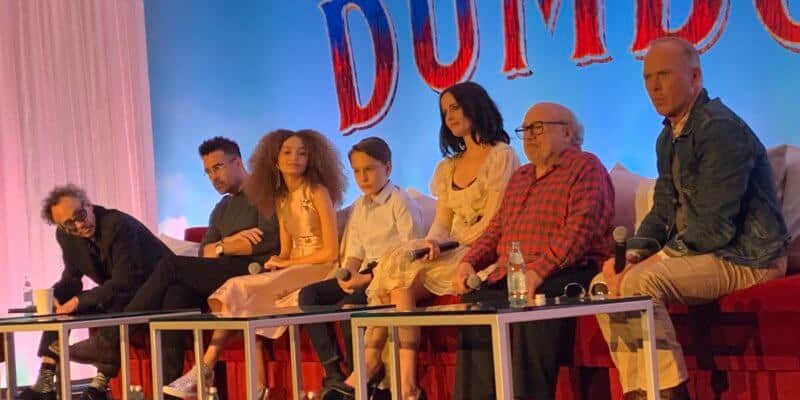 From Disney and visionary director Tim Burton, the all-new grand live-action adventure “Dumbo” expands on the beloved classic story where differences are celebrated, family is cherished and dreams take flight. “The idea of running away to join the circus is a feeling that has always stuck with me,” says Burton. “I never really liked the circus with the captive animals, the clowns, the uncomfortable death-defying acts and did I mention, the clowns? But I understood the idea of it, joining a weird family of outcasts that don’t fit in with normal society, people who are treated differently. That’s what ‘Dumbo’ is about.”

The story of “Dumbo” dates back to 1939 as a planned novelty item called a Roll-A- Book a box with little knobs that readers turned to read the story through a window. Authors Helen Aberson and Harold Pearl wrote the story “Dumbo the Flying Elephant.” Whether the Roll-A-Book was ever produced is a mystery and none have been located, but when Walt Disney purchased the rights to the story, he published about 1,430 copies of a book version of the story.

Originally, the story was to be turned into a short film. But the filmmakers, headed by Walt Disney himself, kept expanding the film till they ended up with a 64-minute feature film starring a charming little elephant.

The original animated version of “Dumbo” flew into theaters on Oct. 23, 1941; it was one of the first films completed after Disney opened its new Burbank studio lot. The film was revered by both audiences and critics, winning an Academy Award for best music, scoring of a musical picture (Frank Churchill, Oliver Wallace). The heartfelt and memorable song “Baby Mine” was also nominated for an Oscar. That endearing relationship between mother and son so beautifully illustrated in “Baby Mine” is one of many reasons audiences have been drawn to the story for generations. “The image of Dumbo is an iconic one throughout the world,” says producer Derek Frey. “People instantly know the baby elephant with the big ears. They may not remember every beat of the story, but they remember the tender moments as well as certain realities of the world that weren’t expected in an animated movie. It’s the kind of story that became a part of your soul as a child.”

Tim Burton’s all-new live-action reimagining not only expands the plot, but its human characters are also central to the narrative serving to interpret the baby elephant’s journey in a way that’s wholly relatable. “It’s a very sweet story,” says Burton. “The idea of a flying elephant is such a simple story. I think that’s why it’s quite popular and affected people so much, because of how primal and basic it is.”

During a recent press conference, we got to hear from the Cast along with Directory Tim Burton. Of course, no press conference is complete without the comedic antics from Tim Burton, Danny DeVito and Michael Keaton. Take a look for yourself and be sure not to miss a moment.

According to producer Katterli Frauenfelder, the filmmakers were keenly aware of the original film’s station in the hearts of people worldwide. “You’re coming up in a modern world with children, their parents, and their grandparents, who are all very aware of ‘Dumbo.’ Tim’s creating a new version. For Tim, it was a challenge to lay a new foundation and one that might be as beloved—and elicit an equivalent emotional response from an audience of today.”

Ehren Kruger’s script paid homage to the original film while taking it in a new direction. Says Burton, “I thought it offered a way to tell that story in a framework that expanded it, but without redoing the original. I just liked the take on it. It was simple, with an emotional simplicity, and didn’t interfere with what the basic through line of the original is about.”

Though he may be the star of the film, Dumbo doesn’t speak. “When I first approached this as a live-action version of the ‘Dumbo’ story,” says screenwriter/producer Ehren Kruger, “it was important to me that we make the world feel as real as possible. So, we made the decision that there weren’t going to be any talking animals. So, Dumbo doesn’t talk, but he’s never talked. The only animals who speak in the animated film are the stork, the chorus of elephants, Timothy the mouse, and the crows.

“So, once we eliminated the talking animals, we were left with a Charlie Chaplinesque character of Dumbo, who is somewhat of a silent-film actor in both the animated film and in our film,” continues Kruger. “We wanted to populate a human world with characters for whom Dumbo’s story would give cause to reflect on their own situations.”

Visual effects supervisor Richard Stammers oversaw efforts behind bringing Dumbo to life on the big screen. “Dumbo is fully CG created, as is his mom, Mrs. Jumbo,” he says. “As our hero character, Dumbo’s emotional journey the subtlety of his eyes and facial expressions and his ability to interact with the actors was so important. We had to find the right balance between the character we remember and an updated, realistic, live-action version seamlessly integrating Dumbo and all of the other animals into what is essentially a live-action movie.”

Are you excited to see this new version of Disney’s “Dumbo?” Let us know in the comments below.