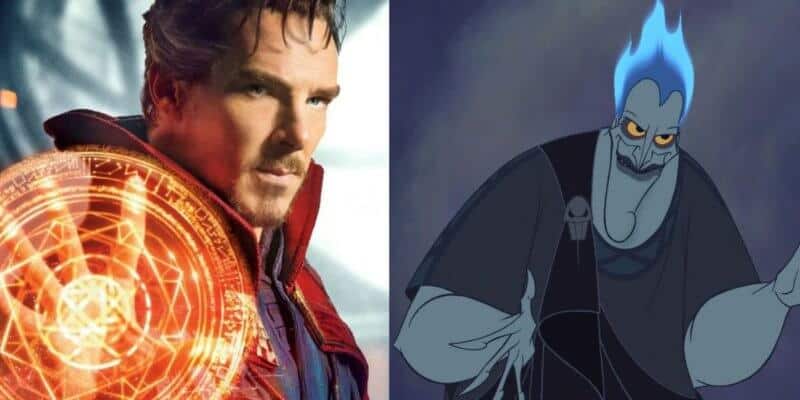 Benedict Cumberbatch is mostly known for his role as Doctor Strange in the 2016 Marvel box office hit and the Avengers films. But Cumberbatch may be making another Disney appearance in the upcoming live action Hercules movie.

Disney has been working their way through their Disney Animated Classics, remaking and bringing them back to the big screen in live action. Most recently, we have heard that Disney has another project up their sleeves — a live action remake of the 1997 film, Disney’s Hercules, with Endgame directors Joe and Anthony Russo as the film’s producers.

Tate Donovan voiced the demigod in Disney’s animated version of Hercules, and we already know that Alexander Skarsgard is at the top of the list to take over as Hercules in the live action. But how will Hercules be the hero he is without taking on the King of the Underworld?

The God of the Dead was originally voiced by James Woods who brought sarcasm and charisma to the evil villain, making him one of Disney’s most beloved and iconic antagonists. But who will be able to bring Hades to life in the upcoming live-action? Well, it’s rumored that Disney has their eyes set on the Doctor Strange actor, Benedict Cumberbatch.

Cumberbatch appears to be on Disney Studios’ wishlist for the role, but just because he is on the wishlist doesn’t mean he will end up with this part. Still, given his experience with the Mystic Arts in the Marvel films, we wouldn’t be surprised if he played a god in a new Disney movie.

Though we may have to wait to find out the full cast, or if Cumberbatch will indeed play this charismatic villain, we do have some information around the live action remake thanks to film producers’ and Endgame directors Joe and Anthony Russo. In a recent interview, Anthony stated:

“Well, I think you always have to bring something new to the table because from our perspective as storytellers, it’s not compelling for us to do a literal translation. We’ve already done that with our Marvel films. We don’t do literal translations of the comics because we feel like if you want that story you can go read that story. We’re going to give you a different story. I think we’ll do something that’s in the vein of the original and inspired by it, but we also bring some new elements to the table.

We also have plenty of other Disney live action films that we can rewatch while we wait including Jon Faverau’s The Jungle Book and The Lion King or the live action version of Beauty and the Beast. We also can look forward to the live-action The Little Mermaid film as well as getting ready to release the highly anticipated Mulan film to theaters.

If you aren’t familiar with the original Disney animated film, here is the official synopsis:

Disney tackles Greek mythology in this animated feature. Hercules (Tate Donovan), a son of gods, was snatched as a baby by Hades (James Woods) and forced to live among mortals as a half-man, half-god. Now a teenager, Hercules needs to perform a rite of passage on Earth to prove himself worthy of living with the gods on Mount Olympus. With his plucky satyr sidekick, Philoctetes (Danny DeVito), along for the ride, Hercules must learn how to use his strength to defeat a series of evil creatures.

Who would you like to see play Hades in the live-action Hercules?