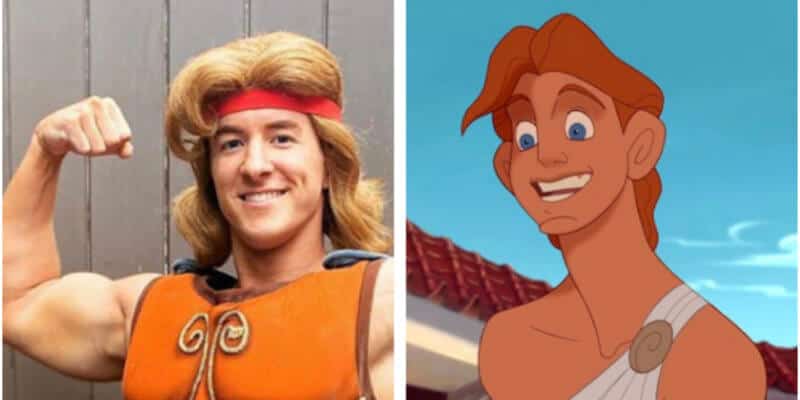 I’m a damsel, I’m in distress, but I can totally handle this hunky hero! The Demi-god himself was spotted leaving Phil’s training center (joking!) and wandering into Disney’s Hollywood Studios today for a Hercules Meet and Greet. Instagram user Jessica Marie (@Jessieluvulots) saw the Zero to Hero and jumped in line for a photo with the caped crusader of Greece.

Y’all… the day just keeps getting better! Don’t you love when your friends look out for you ? thank you #hercules for the surprise at #hollywoodstudios today! #castlife #damselindistress #hero

Our favorite Hero is clad in his fabulous (yet traditional) Ancient Greek Chiton and Cape combo, set off by the medallion of the Olympus Gods in his belt. In Animated style, his larger than life hair falls in line with his signature swoop, yet makes Herc’s lively face look a little small.

Jessie Marie attended the Hercules meet and greet near the exit of the Hollywood Hotel Tower of Terror, right by the gates. While we haven’t seen Herc in a long time at Walt Disney World Resort (personally – ever?) other guests reported seeing Megara in the same location the previous day. If one scrolls Instagram (search #Hercules or #Meg) you can see lots of these character interactions over at Disneyland Resort recently.

Herc’s Greek footwear is both nodding to his historic era yet true to his animated counterpart, climbing the calf and fastening below the knee. The most prominent feature of this specific character are the incredible muscles that are not sleeved (like Gaston). Herc has really been training hard lately and it’s shows… SWOON!

What Herc Could Be Up To

More often than not, these surprise, out of the way character interactions stand as training for the Cast Members involved. They could be in prep for an event such as Villains Night, or Moonlight Magic involving DVC members. With Meg possibly being involved in previous meet and greets, it brings to attention the recent Sweetheart’s Night at Disneyland Resort for Disney After Dark around Valentine’s Day 2020. While there is no official word why Hercules is out greeting guests, we’re not asking too many questions. We’re scrambling over those other squealing fans for a chance at his sweatband!

Did you grab a free seat to the stage show of Hercules presenting in New York City last summer as a part of the programming at The Public Theater’s Delacorte Theater in Central Park? The musical was directed by Lear deBessonet with choreography by Chase Brock. It was promised to include over 500 professional NYC actors and contain material from original composer Alan Mencken. But like The Little Mermaid, The Lion King, Aladdin, and the short-lived Hunchback of Notre Dame, we’d love to see it more widespread and head to Broadway!!

While Live-Action movies have been popping up faster than Gopher from the Hundred Acre Woods, Disney may very well produce a live-action Hercules. Our wish list (and possibly Disney’s, too) may include Alexander Skarsgard of Twilight fame. What about including the actor that plays Loki as Hades?? We’d love to see that take on the movie!

What would you say to Hercules if you had the chance to meet him? Leave a comment below!