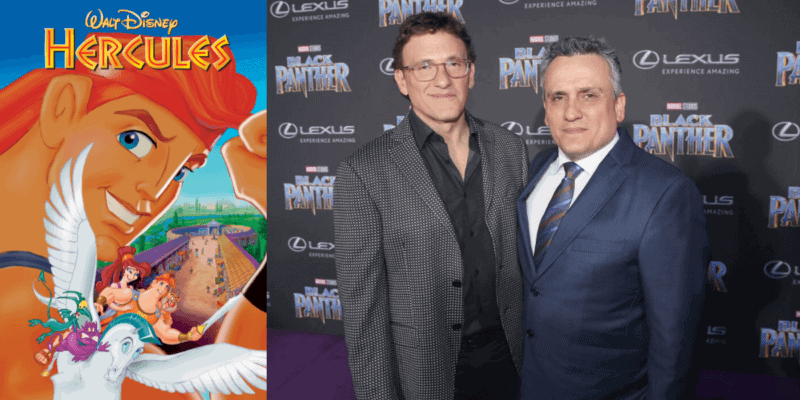 It was on April 30, 2020, when Disney fans discovered that Hercules was targetted as the next live action remake with Joe and Anthony Russo as the film’s producers. Now the Russo brothers have made their first statements on the project.

The first thoughts, of course, conveyed their excitement. The duo clearly wanted this chance. “Both us and our kids are Hercules fanatics,” said Anthony in a recent interview. “And we had heard that Disney was interested in revisiting it and we’re in love with the original. And we made a case as to why we felt we would be right to produce that film and here we are.”

While the project is still in its early stages–they still have not decided on a director–the Russo Brothers told their audience to expect changes from the original animated film.

“We can’t say one way or the other,” said Anthony before noting, “Music will certainly be a part of it.”

Here the proverbial “but.” Anthony shared,

“Well, I think you always have to bring something new to the table because from our perspective as storytellers, it’s not compelling for us to do a literal translation. We’ve already done that with our Marvel films. We don’t do literal translations of the comics because we feel like if you want that story you can go read that story. We’re going to give you a different story. I think we’ll do something that’s in the vein of the original and inspired by it, but we also bring some new elements to the table.

Production teams taking creative liberties with live action remakes of animated classics is nothing new. In many cases, changes like recasting are necessary. However, it still needs to be said to set the right expectations with the audience. If changes are coming, they should be addressed early on and change the conversation among the audience to what could be changed and what should be changed.

But the changes have not come without trouble. From casting choices to song cuts, Disney fans have shown mixed feelings toward the remakes from Jon Favreau‘s The Jungle Book to The Lion King, and the changes that were made to each. Perhaps the Russo Brothers will choose to make changes that allow them to go deeper into Greek Mythology. Perhaps they will choose to completely eliminate the Muses from the script. Only time will tell, right now, what changes fans will have to face with Hercules.

Hercules is the latest remake to come down the Disney pipeline, following films for The Little Mermaid, Peter Pan, and Cruella de Vil.

What changes do you see coming in the live-action remake of Hercules? Are there any changes that would cause you to completely boycott and denounce the remake? Tell us about them in the comments!