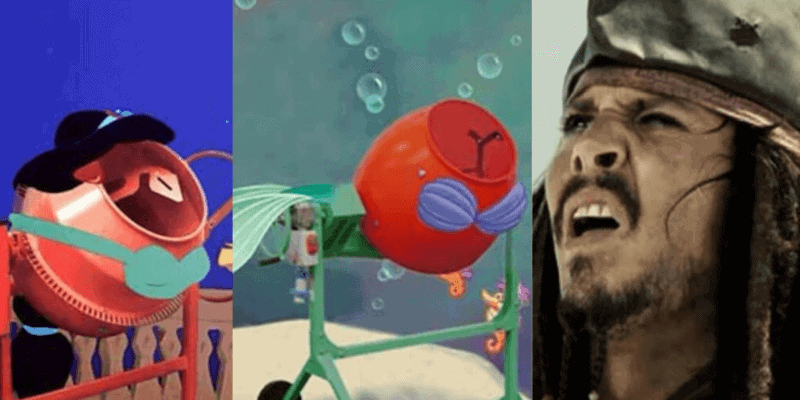 I’ve seen my fair share of weird and wacky reimagining of the Disney Princesses. From superhero-inspired princesses, to villainous princesses to gorgeous traditional Japanese Disney art. I’ve seen em’ all.

Well, I thought I had. But this takes the cake.

The heroic creator of these funny pictures deserves a round of applause for their reinterpretation of Disney Princesses as … cement mixers.

Why cement mixers? Your guess is as good as mine. I would’ve never in a million years come up with this, but I have to say, it’s beyond funny having a classic Disney movie picture but instead of the Princess there’s just a great big cement mixer.

I can honestly say I never thought I’d be writing about a cement mixer Disney Princess meme, yet here we are. Let’s dive into the funniest Disney cement mixers. Funny jokes people. Funny jokes.

Is the Disney fandom ready for this level of sacrilege towards their favorite Disney movie? Let’s find out.

The best thing about the Belle cement mixer is how normal the Beast is treating the situation. Like, he has no notion that he’s dancing with a cement truck in cosplay. Man, I love the internet.

The elegant evening dresses of the cement mixer princesses make them so much more hilarious. There’s just something so hilariously random about seeing our favorite Disney characters as such everyday objects.

Aladdin, like the Beast, has no clue what’s going on. This one might be my favorite. ‘Tell me, Princess, now when did you last let your rust decide’?

This a super cement mixer that is also a mermaid. Any questions? Classic Disney movie scenes with cement mixers are my new favorite thing. Farewell childhood memories. Hello, cement.

I may be running out of things to say about these. They are cement mixers with a Disney Princess paint job. What else can one say? This one is a pretty (?) cement truck; I guess?

I was just joking. It’s official. This is the most beautiful reference to Disney movies ever made. Throw a well-known Disney princess like Elsa into a cement mixer (please don’t literally do that) and you’re golden. I’ve seen the light; this is what high-art looks like. I have seen the future of art and it is the cement mixer picture.

So … that’s Disney Princesses as cement mixers. In all seriousness, these meme pictures are hilarious. Now we just need one for each Disney Prince. And where’s my main girl, Princess Rapunzel at?! I’d love to see some more Disney movies and even Star Wars get the cement mixer treatment.

I love this stuff. Please send me the latest funniest Disney Princess meme pictures, because they have me howling with laughter.

What do you think of these funny pictures? What would you like to see your favorite Disney Princess reimagined as next? A garbage truck? A regular truck? A sock? Whatever you think, let us know below. I think I need a laydown.

Comments Off on Artist Reimagines Disney Princesses as … Cement Mixers?