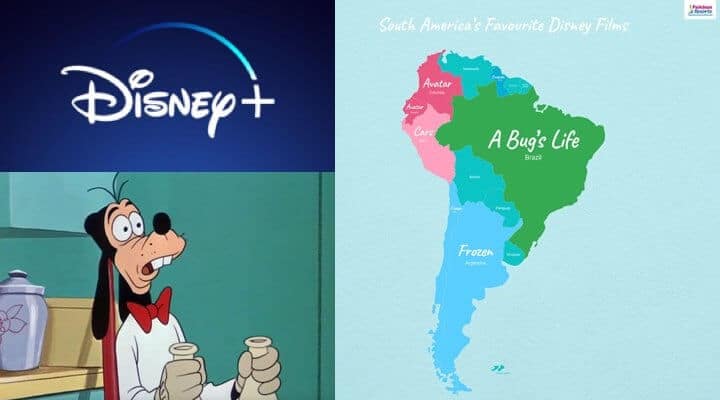 Everyone has a favorite Disney movie. Some love the classics like Sleeping Beauty, The Jungle Book, or Dumbo. Some favor the live-action remakes, while some are vehemently loyal to the Disney renaissance films like Tarzan or Lilo and Stitch. Personally, I’m a Hunchback of Notre Dame kind of guy.

So, there’s some pretty interesting stuff here. The U.S unsurprising favors Frozen, while it and its sequel continue to be some of the highest-grossing Disney princess movies of all time. Europe is far more mixed, however, as a number of countries including the United Kingdom and Turkey chose to watch Avatar above all else. France, perhaps unsurprisingly favors Ratatouille, which is of course set in Paris.

Other interesting picks include China favoriting Avatar, Russia loving Frozen, and New Zealand rating … Cars? Ok, no judgment here but I didn’t expect that one.

Take a look at the individual maps below to see what your country’s favorite Disney+ movie is!

Pretty simple, but both Mexico and Canada’s picks are somewhat surprising. No disrespect as I’m a huge fan of each fan favorite, but they do seem a little random! As much as we all love the fairy tale based Disney princess movies, it’s refreshing to see that some countries’ favorite Disney movie doesn’t have to feature a song and a dance to still be some people’s favorite.

South America – Largely the same but with more Cars and Avatar

Seriously, who knew A Bug’s Life was so popular?! Other than that, nothing too surprising here. It’s nice to see Disney classic Cinderella getting represented too. Prince Charming and company will be pleased.

Asia is a little more varied, which is cool. Animated classic Aladdin is well represented, while Pixar’s Toy Story also makes an appearance. As does Wreck-it Ralph. I still can’t get my head around the fact that that is a country’s favorite Disney movie. So cool.

Oceania – Frozen and Cars (and The Sound of Music? Huh.)

I guess the hot land of Australia loves to fantasize about the cold! Disney’s Frozen tops the list here, as well as Disney Pixar’s Cars and … The Sound of Music. Right. Ok.

Much like the countries and people who live there, my homeland of Europe is vastly diverse. Ratatouille, Mulan, and High School Musical pop up, as well as a decent helping of Avatar and Frozen; clearly the two most popular Disney movies.

Africa – It’s all about Moana and Avatar

It’s very cool to see Africa give Moana and Aladdin some love, along with The Lion King and Mulan. Also Lady and the Tramp!

So there you have it; each country’s favorite Disney movie based on Disney Plus viewing stats. If you ask me, it’s what isn’t there that’s more surprising. There’s a distinct lack of animated classics like Bambi, The Little Mermaid, and Beauty and the Beast. Heck, even The Lion King is only featured a little. The lack of Marvel and Star Wars representation is also deeply shocking.

Also; no Hunchback. This makes me so sad.