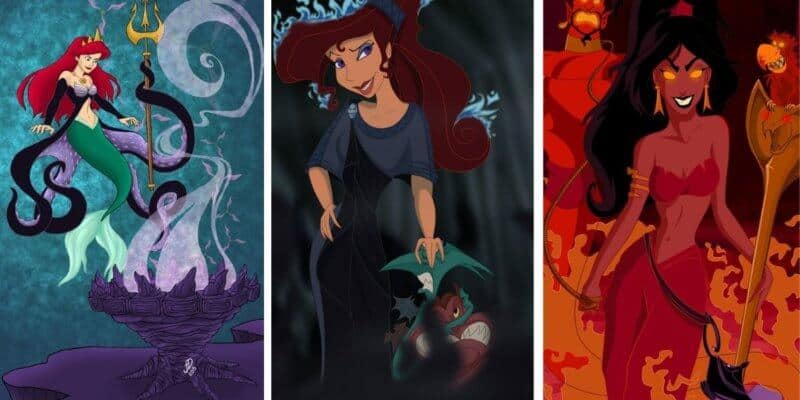 We all know and love the iconic Disney Princesses. From Cinderella to Snow White to Princess Jasmine, girls young and old look up to the Princesses for their entire lives.

Take a look at the finished masterpieces below:

Nani from Lilo and Stitch

Okay, so we know that Nani isn’t technically a Disney Princess but this fan art was just too good to not include.

This piece of art was done by Kasami-Sensei and is included in the “Twisted” art collection. And what’s even better is Kasami-Sensei includes a story to go along with this artwork! Check it out here.

Kida from Atlantis: The Lost Empire

This piece of art was also done by Kasami-Sensei, which means this also comes with an imaginative and great storyline. Kasami-Sensei states:

Story : When becoming one with the kings of old Atlantis, Kida also had the mind of a power-obsessed king and that one wanted to rule Atlantis and the world since the Atlanteans are superior in almost every way. The king knew Kida’s weak spot for Milo and killed him without question. The others had a choice, to join or die. Both wanting money for the killer king Kida, Rourke and Helga wanted to capture her but that backfired and they were turned in crystal minions of Kida and soon the world will fear the return of Atlantis it self.

Esmeralda from The Hunchback of Notre Dame

This third piece of artwork was also drawn by Kasami-Sensei. This time, the artist reimagined Esmeralda with a dark side in the “Twisted” art collection.

The story imagined by both Kasami-Sensei and Barricade379 is definitely an interesting one. Check it out here.

We all know and love Meg as the independent and fierce girl from Hercules, but what if she was actually the villain? This piece of art shows us what it would be like if she took over Hades’ position and rules the Underworld as a villain in the film.

This artwork was done by artist Spiritwollf.

This creative and imaginative piece of art was created by jeftoon01 in the “Twisted Princess” collection. This artist also gives a backstory behind the artwork — Jane has to survive in the wilderness on her own rather than being rescued and saved by Tarzan.

Artist jeftoon01 also decided to take a twist on the Native American Princess, Pocahontas. According to the artist, this is what Pocahontas would have become if Governor Ratcliffe had killed John Smith.

Ariel from The Little Mermaid

Artist James Dunn, has reimagined everyone’s favorite mermaid as the evil sea witch, and the result is fantastic!

Belle from Beauty and the Beast

It’s kind of hard to imagine the sweet and innocent Belle as a villain, but thanks to the “Evil Disney Princess” collection by Willemijn1991, we can actually see this Disney Princess turning evil!

Another piece of art done by Willemijn1991! This one takes the quiet Snow White and transforms her into the cold-hearted Evil Queen. Could you imagine?

We all know that Jasmine is bold, independent, and has a very strong personality. But what if she was on the dark side instead of the good side of things? Jasmine would make one evil villain!

This artwork was done by Kasami-Sensei, which means we get a storyline along with the piece of art! Check it out here.

This Disney Princess artwork was created by xHybridus, and is part of their “Gone Evil” collection.

This artist also gives us a backstory to this piece, which picks up after Mulan is caught faking her gender due to the injury after causing the avalanche. To read the full story, head on over to xHybridus‘s page!

Which one of these artwork pieces is your favorite? Let us know in the comments.