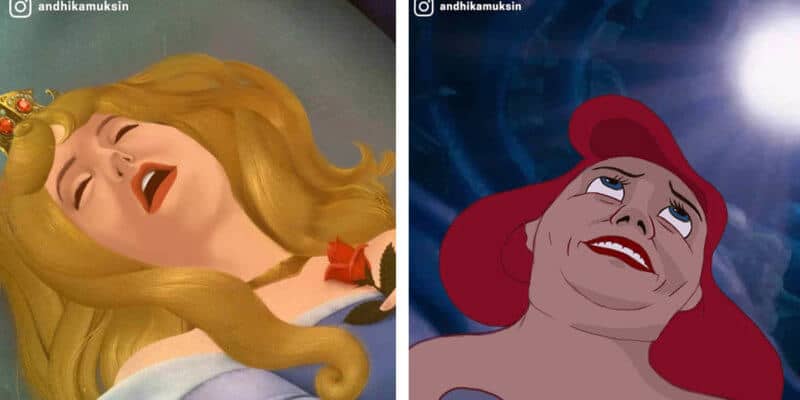 We love Disney Princesses just as much as every other Disney fan: they teach us to dream big and never give up on what we believe in. But sometimes we wonder what they would look like in real life (and not at the Disney parks).

Well lucky for us, one artist recently reimagined some of the Disney Princesses and gave them more realistic features and mannerisms to show what their biggest scenes may have looked like if they took place in real life.

Here’s how Princess Aurora would have realistically looked while sleeping. We don’t know about you, but we think this is pretty relatable.

Cinderella on FaceTime after she first woke up is probably the most realistic we’ve ever seen this classic Disney Princess. It looks like Jacques the mouse called her a bit too early in the morning…

Here’s a more accurate look for Ariel from that painfully relatable and unflattering angle. The little mermaid is absolutely gorgeous, but let’s face it — she wasn’t animated in the most realistic way!

The human world is a mess

The human world is a mess…but Ariel would be too after washing ashore. Don’t you think?

Jasmine, is that you?

We could totally see Jasmine looking like this after rapidly flying around the world on a magic carpet ride…but why does Aladdin still look amazing? Seems pretty unfair to us!

Ariel chowing down on some Pizza Planet (and Prince Eric staring at her lovingly) is everything we could ever want in a Disney Princess movie. Too bad this scene wasn’t in The Little Mermaid!

A more realistic expression from Pocahontas

Pocahontas experiencing the forces of gravity is a look at how we feel when diving head-first into a scary situation.

Who actually looks as good as Snow White did the first time she ate an apple?

Another unfortunate angle for Ariel. Can’t this little mermaid catch a break?

Aurora was under a spell when she pricked her finger, but it would still hurt, right?

Part of your world

Nobody looks that good when being hit by a wave, not even a mermaid…

Snow White looked a little groggy waking up from true love’s kiss…but the Prince is still in love!

Belle of the ball

Cinderella must have felt awful when she was upstaged by Zendaya at the Met Gala.

Jasmine is totally relatable while getting ready for a big night. We know the feeling!

Who would really look good from that angle? A more realistic look at Belle in Beauty and the Beast!

The fairest of them all

Snow White and the huntsman hilariously use the face swap filter

Pocahontas, nobody really looks that good in the wind!

You can view all of these works of art as well as more fun Disney illustrations by the artist Andhika Muksin on his Facebook page.

If you’re anything like us, you love seeing new interpretations of Disney characters. Take a look at these reimagined edgy makeovers for Disney Princesses, or these Disney characters drawn in the style of Pokémon trainers.

Which of these more realistic interpretations of Disney Princesses is your favorite? Let us know in the comments!