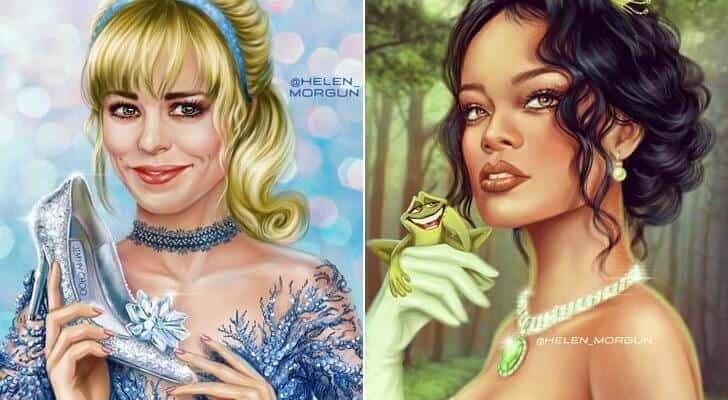 The Disney Princesses are some of the most iconic Disney characters of all time as they all share stories of heroism, strength, courage and so much more and this inspired an artist who couldn’t help but compare these women to some of the incredible women in Hollywood! Here is a look at one artist’s rendition of what some of Hollywood’s most famous female stars would look like if they were Disney Princesses.

The social media feed of Elena Morgun, an up and coming Instagram user and digital artist, is full of some incredible illustrations of some of Hollywood’s biggest stars reimagined in the theme of some of our favorite TV shows and movies! In this new series or art, Morgan utilizes the same digital styling through the use of her Wacom graphics tablet and Adobe Photoshop and was able to transform stars like Emilia Clarke, Camila Cabello, and Lucy Liu into some of our favorite leading ladies from beloved Disney films and we’re enchanted by the results!

In this first image, we see Rachel McAdams transformed into Cinderella! And like you’ll see in some of the many other images in this series, Morgan didn’t only transform the character, but she also took the time to add small but integral details that really sell the magic of each princess!

Here is a look at the rest of the images in the series:

Cara Delevingne as Anna From Frozen

Margot Robbie as Elsa From Frozen

Some other works by Elena include a reimagined GQ cover featuring stars from HBO’s “Game of Thrones” series and many other Disney-inspired creations!

To see even more of Elena’s incredible digital creations, be sure to check out her Instagram page, where she publishes all of her transformative and imaginative artwork!

What are your thoughts on all of these stunning works of art? Let us know in the comments below!