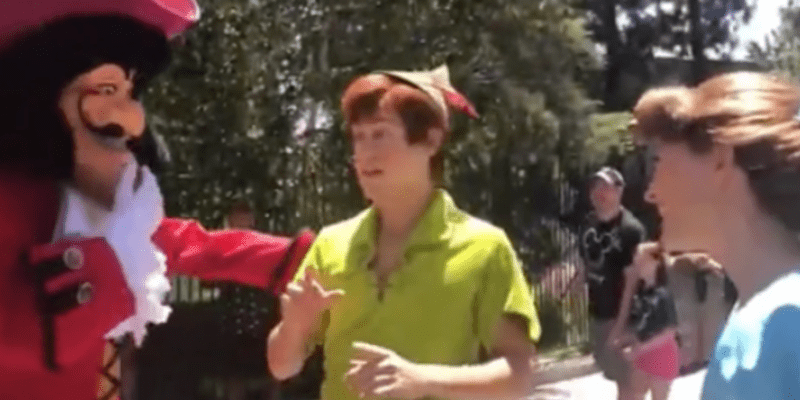 A Disney character cut a meet and greet short after giving an emergency signal.

There is so much more to do at Walt Disney World Resort and Disneyland Resort than just ride iconic attractions. While Disney Park Guests visit Magic Kingdom, EPCOT, Disney’s Hollywood Studios, Disney’s Animal Kingdom, Disneyland Park, or Disney California Adventure, they are treated to being completely immersed in the magic. Other than rides, Guests can experience entertainment shows, enjoy delicious snacks, and meet some of their favorite Disney characters.

Whether it be Mickey Mouse, Minnie Mouse, Donald Duck, Goofy, Pluto, and Daisy Duck, or whether it be some of the fan favorites from Disney properties like Pixar, Marvel, Star Wars, or, of course, your favorite Disney princess, it never gets old meeting those Disney characters who have become an important part of our childhood.

A video recently surfaced from a bit of a scary situation while Disney characters from the beloved movie Peter Pan (1953) were interacting with Guests.

User @allthings_disney_ shared the video on TikTok, which was taken by Skywalker Pan.

As you can see in the video, Captain Hook trips at one point and continues with the meet and greet. Shortly thereafter, he covers both of his eyes. This signal allegedly tells other Disney Cast Members that something has gone wrong and that there is an emergency.

As soon as the signal is given, the meet and greet is cut short and the characters begin to make their way offstage. As Captain Hook marches to the backstage area, he stops to wave at the Guests before going inside but is seemingly holding his back. There has been no confirmation as to why the meet and greet was cut short or what the emergency was for the Cast Member, but hopefully, they are doing okay!

This isn’t the first video to show a bizarre instance with a Disney character. Toy Story’s Jessie was carried offstage after an incident  and, just recently, Spider-Man had to be helped backstage after allegedly hurting his ankle at the Avengers Campus in Disneyland.

What do you think of this video of the Disney character’s signal? Let us know in the comments!