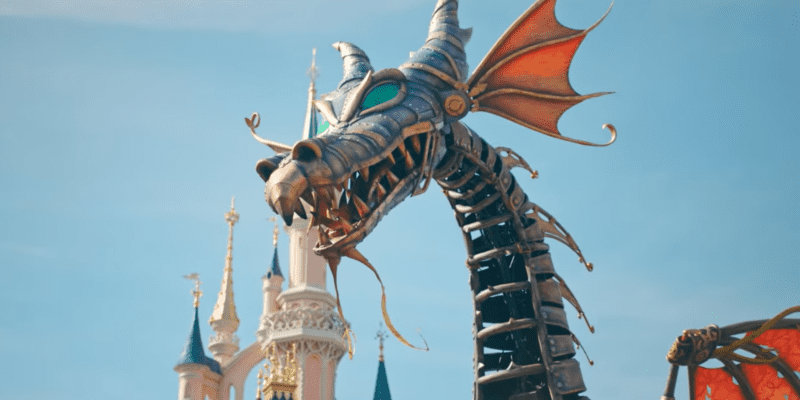 A few lucky Guests were able to meet a couple of rare Disney characters who made a magical appearance during a fan-favorite parade.

Disney Parks worldwide offer Guests the chance to meet their favorite Disney characters, whether that be a classic Disney character, an intergalactic icon from the Star Wars universe, or a mighty hero from the Marvel Cinematic Universe. Meeting Mickey and Minnie Mouse,  Goofy, Donald, Chip, and Dale, Winnie the Pooh, Captain Jack Sparrow, Chewbacca, Kylo Ren, Captain America, Iron Man, Thor, and many more can create an emotional and memorable moment for the young and the young at heart.

However, some rare Disney characters who only appear at the Parks to meet Guests during special events, like Mulan and Mushu during Lunar New Year celebrations at Disney California Adventure, in Disneyland Resort, or several villains and costumed characters during Mickey’s Not-So-Scary Halloween Party at Walt Disney World. These characters appearing during such exclusive events makes Guests extremely excited when they get a chance to meet them.

Guests visiting Disneyland Paris recently had the chance to meet a couple of these rare characters, who made a magical appearance during the popular entertainment offering, Disney Stars on Parade.

Disney Cave 0f Wonders (@Cave0fWonders) shared a couple of videos of Mulan in her bride dress, joining her princess friends during yesterday’s presentation of Disney Stars on Parade.

Mulan surprised us by being on the Disney Stars on Parade!

To Mulan who was on the Disney Stars on Parade today!

The appearance of Mulan could be in preparation for the World Princess Week Celebrations at Disneyland Paris and Disney Parks worldwide from August 21 to August 27, 2022. Disneyland Paris recently announced the Park would host a Royal Promenade to celebrate the courage and benevolence of the Disney Princesses and Queens Anna and Elsa from Disney’s Frozen during this year’s Ultimate Princess Celebration, among other magical activities, with more details coming soon.

Disney Cave 0f Wonders (@Cave0fWonders) also shared videos of Mowgli, from The Jungle Book (1967), who returned to Disney Stars on Parade, joining Rafiki, from Disney’s The Lion King (1994), on his jungle-themed float a few days ago.

Mowgli is back on the Disney Stars on Parade

Start dreaming as Peter Pan’s flying ship sails by, let Elsa’s delightfully icy wind carry you away, and tremble at the deafening entrance of the fire-breathing dragon!

Join the fun every afternoon in Disneyland Park with this star-studded parade, bringing magical tales to life with stunning theatrics. Get a sneak peek here!

Have you ever met a rare Disney character? Let us know in the comments below!